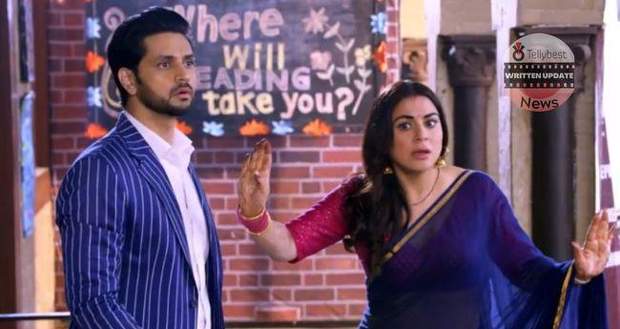 Today's Kundali Bhagya 27th October 2022 episode starts with the terrorist asking their leader for tolerating Prithvi who is more of a cartoon.

Just then, Prithvi comes in with a mask but the terrorist tells them that they do not need to cover their faces as everyone has seen them.

In the meantime, Prithvi assumes them to be their leader and tells them to talk softly and not shout.

After a while, the terrorist manages to find the children as well as Arjun.

Seeing Arjun come in with the goon, Kavya becomes happy and tells the other kids that he will save them all.

Preeta taunts Arjun for being caught while Arjun tells her that it was his plan.

Just then, Prithvi tells them all to be quiet while Arjun recognises him and takes his name.

Meanwhile, Sherlyn dramatises the situation and tells the media that she was Rishabh’s ex-wife who cares for him and requests them to be considerate of people's feelings.

Shrishti stops her from speaking and tells her to stop the drama while Kareena asks her about Prithvi.

In the meantime, Prithvi denies being there while Arjun instigates him and calls him ‘Darpok’ like Prithvi.

Later, Kareena berates Sherlyn while she tells her that Preeta has taken them under her influence and that is why they cannot see what is important.

Rakhi also scolds Sherlyn for doing the drama of caring for Rishabh now when she never cared for him before.

Afterwards, Rakhi tells her that what Rishabh is doing is exactly what a loving father does and they will do the same for Kavya as they all love her.

Sherlyn lets a tear slide from her eyes and thinks inwardly that she has started caring for Rishabh and considers him hers and now she will do everything to get him back.

Meanwhile, Prithvi and Arjun argue with each other when Preeta tells Arjun to stop as they are dangerous people who can harm children.

However, Arjun tells Prithvi that he is not afraid of him and calls him “Dadi Waala Bakra”.

Prithvi gets instigated and orders the terrorists to take everyone out and tell them who he is.