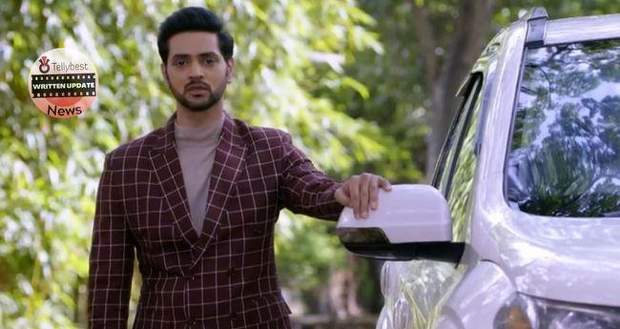 Today's Kundali Bhagya 27th September 2022 episode starts with Arjun watching his wardrobe and contemplating what to wear for the party when Anjali comes there telling him that this time will never come back for him to take revenge.

Anjali tells him that no matter how much his soft heart insists he will have to remember what Preeta and Rishabh have done to Karan.

Arjun tells her that she is a good friend who always thinks for his best.

Arjun also tells Anjali about the plan that he will implement at the party after the launch. He plans to use Rishabh’s cases over the past five years including Karan’s murder to be showcased at the party.

Meanwhile, Rishabh is remembering Sherlyn’s warning and watches Preeta getting ready in her room.

On the other hand, Preeta is remembering Karan.

Rishabh thinks of the time when he married Preeta to protect her and her child to this time when he cannot imagine his life without them.

After a while, Sameer observes Rishabh's worried stature and asks him what is bothering him.

Rishabh explains to Sameer his meeting with Sherlyn and how her words about someone taking away Preeta from him is bothering him.

Just then Mahesh comes to them asking about his clothes while Dadi tells him that he needs to change.

Rishabh also sides with Dadi and tells Mahesh to go and change.

Afterwards, Preeta comes down to find Shrishti in a fix.

Later, Biji and Janki come there bringing sweets with them.

After a while, Shrishti explains to Preeta and Biji about the presentations and future projects to be screened on the projector that will be placed there.

In the meanwhile, Kritika is thinking about Prithvi and thinks of herself as unlovable.

Just then Kareena comes to Kritika and tells her that she is the best daughter she can have and that people like Prithvi do not deserve her.

She asks Kritika not to let people judge her and that it is better to be alone than be with people like Prithvi.

Later in the party, Arjun cheers Kritika and tells her that he would have thrown Prithvi out of his life if he was not already out.

After a while, Shrishti is waiting for Sameer to compliment her when Arjun pipes in and makes Sameer look a fool.

Later, Rishabh welcomes Arjun to the party while he looks at Preeta who is looking gorgeous in a white dress.

© Copyright tellybest.com, 2020, 2021. All Rights Reserved. Unauthorized use and/or duplication of any material from tellybest.com without written permission is strictly prohibited.
Cached Saved on: Saturday 1st of October 2022 10:07:31 PMCached Disp on: Sunday 2nd of October 2022 01:16:16 PM