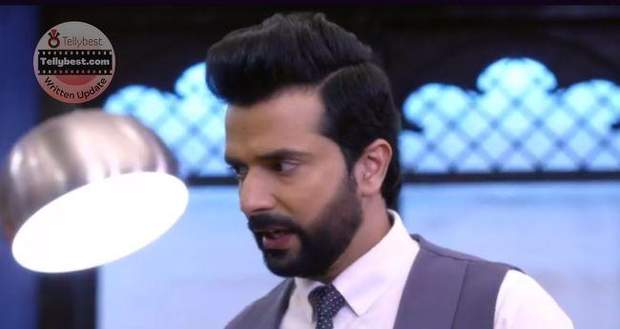 Today's Kundali Bhagya 28th December 2022 episode starts with the terrorist knocking on the pilot's cabin and asking them to connect him to the authority base.

The authority tells him that they have informed the police about their demands and based on the news it seems that the police have taken the action.

However, the terrorist is not impressed and tells him to give him some proof or else he will start killing two people every two minutes.

In the meantime, the snakes are roaming inside the aircraft and causing the wiring to cross.

After a while, the plane suffers turbulence and scares the terrorists too.

Meanwhile, Preeta stands up to shut the luggage drawer and falls on Arjun after being imbalanced.

Arjun and Preeta lose themselves in each other eyes and forget about their surroundings.

The terrorist spots their trans-state and rebukes them for romancing when everyone’s life is under threat.

While Rakhi irritates the terrorist with nonsense talk, another terrorist comes out and tells the passenger that he is getting angry because the government has not fulfilled his demands.

He tells his partner to go into the pilot’s cabin and keep an eye on them.

Just then a snake enters the cabin and bites a woman’s hand when she bends down to pick something.

Seeing the snake everyone begins to scream while Preeta asks the magician if what he told her about the snake is true.

Soon the snakes start crawling on the floor of the plane and some more enters through the AC vents.

Preeta and Arjun begin to banter at not believing the magician in time and tell each other that now nothing can be done about them.

Preeta tells Arjun that they could not have done anything even if they knew beforehand.

In the meantime, the magician tells him that snakes are slow because they have just woken up but soon their speed will increase and they will start biting everyone because they are hungry,

Meanwhile, the terrorist tells everyone to clear out the snakes while he goes and talks to the authority about releasing his men.

However, Arjun tells him that he should go and check on his mate first who must be dead by now.

Heeding Arjun’s advice, the terrorist comes down to the cargo to check up on his mate and is shocked to see him dead.

He searches for the bullet and gets scared to see the snake inside the bullet bag.

Later he decides to save himself using the gun that the dead mate has but gets bitten while searching for it.

Elsewhere, Rishabh and Sameer come to Dadi’s room where Rishabh comforts Dadi and tells her to have faith and that everyone will come back home safely.

Meanwhile, Rishabh tells Dadi that he is going to talk to the commissioner and asks him to do everything to bring everyone home safely.

After a while, Rishabh is shocked to see Anjali at his door who tells him that she is here to seek his help.

She tells him that she understands that he does not want to have anything to do with Arjun but she needs his help.

Rishabh tells her to forget about the past for now and tell him what she needs help with and if he can help her then he will.

Anjali tells him that she does not know any high authorities here and needs to know what actions they are taking to save the people on the flight from the terrorist.

© Copyright tellybest.com, 2022, 2023. All Rights Reserved. Unauthorized use and/or duplication of any material from tellybest.com without written permission is strictly prohibited.
Cached Saved on: Wednesday 25th of January 2023 09:11:35 AMCached Disp on: Sunday 5th of February 2023 02:42:18 AM