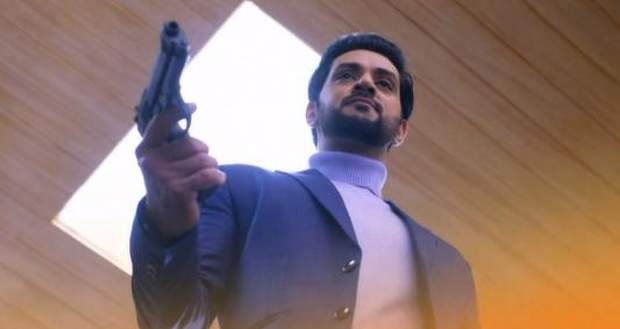 Today's Kundali Bhagya 28th July 2022 episode starts with Rishabh and Preeta arriving at Arjun’s house while Rishabh tells Preeta that there is no need to worry when he is with her.

At the same time, Raja is scolding his goons for being of no use to him.

Just then Preeta and Rishabh come to them and Bittu tells Raja that he is the one whose contract Arjun has given to him.

Meanwhile, Arjun jokes with Anjali to avoid the subject of Goons while Anjali tells him that those goons are very dangerous and he should give them their money.

Meanwhile, Bunty praises Arjun in front of Raja while Raja resolves to take revenge on both Arjun and Rishabh.

In the meantime, the bell rings and Arjun smiles and goes to open the door.

As he opens the door, Preeta was about to knock and stop in the middle.

Arjun and Preeta look at each other in a trans when Anjali and Rishabh come and disturb their silence.

After being seated, Anjali asks them for refreshment while Arjun tells Anjali to bring Falooda which evokes Preeta’s memory with Karan.

Later, Arjun taunts Preeta for slapping him anytime, while Rishabh defends Preeta saying that Preeta has been disturbed for a long time, and that is why she did what she did.

Arjun tells Preeta that she has a habit of overreacting and he had to pay the price despite being innocent.

Rishabh supports Preeta saying his unusual behaviour with them causes the reaction which seems fair to them but an overreaction to him.

Rishabh also tells Arjun that he is here to form a bond of friendship as he seems one of their own.

Arjun asks Preeta to apologise if they want his friendship.

Preeta looks at Rishabh and then apologises to Arjun in a low voice then repeats again for his benefit.

Arjun looks at her with hurt eyes and tells her that he will try to forgive her in future but not just now.

Rishabh compares his childish response with Karan and hugs him.

Just then, Arjun gets a call from Rakhi to invite him to Rishabh and Preeta’s anniversary party.

Arjun agrees to come while looking at Preeta angrily.

Afterwards, Preeta and Rishabh leave while Arjun looks at her with longing and Preeta turns and looks at him feeling his eyes on her.