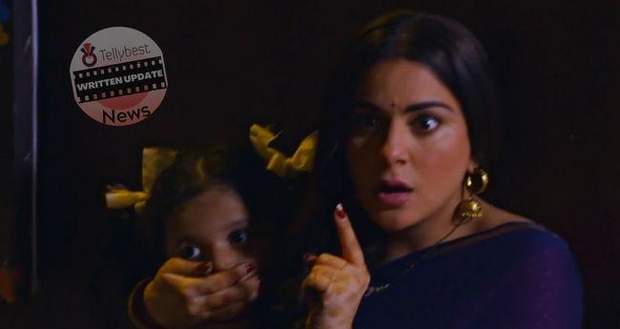 Today's Kundali Bhagya 28th October 2022 episode starts with Sherlyn following Rishabh when he berates her for following him in such a tense situation.

Sherlyn tries to brainwash Rishabh telling him that his family does not care for him.

Sherlyn apologises to Rishabh for all that she has done but Rishabh tells her that he cannot help her and asks her to leave him alone and let him rescue Kavya.

Sherlyn smiles wickedly seeing Rishabh talk politely to her and resolves to get him back by hook or by crook.

Meanwhile, the terrorists settle everyone in the library while Prithvi looks around.

Later he asks the terrorist for his phone to connect to that school speaker.

At the same time, the police send a lady officer dressed as a teacher.

In the meantime, Prithvi calls the police and tells them that he has made the children hostage.

Prithvi put forward his demand for a safe passage out when Rishabh interrupts him.

Prithvi becomes happy to hear Rishabh’s voice and makes fun of him calling him a businessman.

He also tells him to arrange twenty crore rupees or else he will kill his daughter.

Arjun threatens Prithvi to put his gun away from Kavya while Prithvi asks him why is he so concerned about her.

Arjun tells Prithvi that she is his daughter shocking everyone but Prithvi clarifies that he means like a daughter.

Arjun tells him that is exactly what he means and he loves her a lot.

As the police negotiate with terrorists, the police agent stumbles upon them looking like a lost teacher whom they push away to be seated with others.

Outside, Rishabh gets angry at the police for doing nothing while the terrorist treats children and women poorly.

The police officer explains to Rishabh about the new teacher who is a police officer and shows them their tech team who is recording everything so they can see and decide their next step.

After hearing the police, Sherlyn calls Prithvi and tells him about the police officer among them.

Prithvi gets frustrated at being bombarded by problem after problem and decides to teach the police a lesson.

Meanwhile, Sherlyn sees Raja and Vishnu outside and asks them to help Prithvi.

At the same time, a police officer passes Arjun a blade.

Just then Prithvi comes inside and exposes the police officer as an undercover agent.

Later, Prithvi asks the police officer to hand over the camera to him.

Meanwhile, Arjun successfully cut the rope and passes the blade to Preeta.

Prithvi refuses to accept the small toy as a camera and asks her to show where is the real camera.

The police officer looks at him annoyingly and tells him that it is the camera.

© Copyright tellybest.com, 2022, 2023. All Rights Reserved. Unauthorized use and/or duplication of any material from tellybest.com without written permission is strictly prohibited.
Cached Saved on: Monday 21st of November 2022 12:51:35 AMCached Disp on: Thursday 1st of December 2022 01:21:39 PM