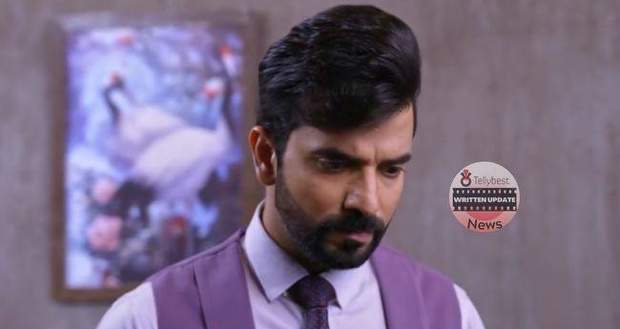 Arjun appreciates Rishabh looking happy and handsome while Rishabh gives him credit for that.

Later, Arjun is chatting with Biji when Anjali eyes him angrily and Arjun rushes to her side.

Hearing Anjali complains about being cosy with Luthras Arjun gets angry and tells her that she knows her plan and yet she is suspecting him.

Seeing Arjun worked up Anjali tries to calm him when Biji comes to talk to Anjali and takes her away.

Biji tells Anjali to not get close to Arjun or else she will slap her.

Meanwhile, Shrishti stops Biji from leaving the party asking about the fight with Anjali while Biji tells her that Anjali is not a right match for Anjali.

Just then Rishabh comes to them and is amused to hear their comments on Arjun and Arjun.

He also tells them that Anjali is in love with Arjun.

This put Biji and Shrishti on alert and they decide to stop Arjun from falling for Anjali.

However, Anjali overhears their talk while Rishabh tells her that they are good at heart and do not want any harm for them.

Meanwhile, Arjun is watching Preeta mingle with other guests and feels lost in her sphere.

Preeta looks at Arjun and she also feels the attraction toward Arjun.

After a while, they begin to communicate silently with each other.

In the meantime, Sherlyn hears on news about the collaboration party and gets angry at Prithvi for not delivering on his promise.

Meanwhile, Prithvi and his inmate are being transferred to another jail when Raja and his goons help them escape.

Prithvi and his inmate decide to implement their plan.

Later, Prithvi tells the inspector that they are rectifying the mistakes which they committed when they put an innocent man inside.

Prithvi takes the police's sim card and punctures their jeep tyres to stop them from following him.

At the party, Arjun puts a black mark on Preeta calling her beautiful.

Preeta feels offended and tells him that he does not do something like this to her.

Arjun argues with Preeta while Preeta complains to Rakhi about Arjun’s behavior who tells her that Arjun’s intentions were not wrong.

© Copyright tellybest.com, 2022, 2023. All Rights Reserved. Unauthorized use and/or duplication of any material from tellybest.com without written permission is strictly prohibited.
Cached Saved on: Monday 21st of November 2022 06:37:08 AMCached Disp on: Friday 9th of December 2022 04:44:06 AM