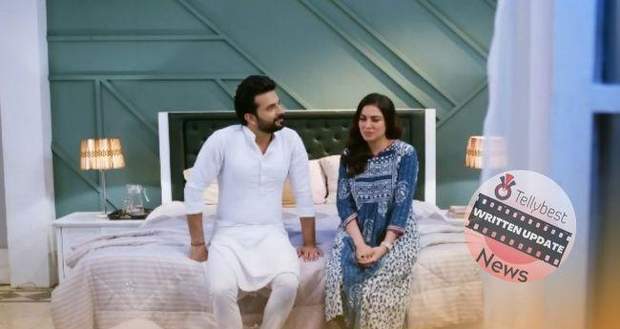 Biji gives words of wisdom to Shrishti about married life while Shrishti asks Biji to sing a lullaby to her.

Meanwhile, Mahesh is trying to convince Rakhi of his innocence but Rakhi tells him that she will only talk when Rishabh is here.

Just then, Preeta comes to give medicine to Dadi and enquires about Rakhi’s bad mood from Mahesh.

However, Mahesh blames Rakhi for always assuming things on her own.

Just then Rishabh arrives looking worried at being called in the middle.

Rakhi comes crying to Rishabh and complains about Mahesh having an affair with another woman.

Despite assuring Rakhi that the woman is old, Rakhi keeps harping about the affair and planning an outing with her.

To distract Rakhi and cheer her, Mahesh suggests inviting Arjun to the Ganesh Chaturthi celebrations.

Preeta’s face falls at the mention of Arjun but she remains quiet seeing the delight on Rakhi’s face.

Meanwhile, Arjun is thinking about his encounter with Preeta in the afternoon.

Just then, Anjali confronts him for thinking about Preeta while Arjun tells her that he is not in the mood to talk about it.

In the meantime, Prithvi tells Sherlyn about Shambu whom he duped last Diwali but now he is on his trail.

Just then a bell rings and Shambhu and his goons are at the door who captures Sherlyn and Prithvi.

Meanwhile, Anjali serves dinner and advises Arjun to keep away from Preeta.

She also accuses Arjun of desperately waiting for the opportunity to meet Preeta.

However, Arjun denies the accusation while Anjali’s Dadi comes to the table and tells Anjali that Arjun is a one-woman man and he has found her and now will love her forever.

On the other hand, Prithvi begs Shambu to leave him as they do not have money to pay him back.

However, Shambhu tells him that it is not his problem and asks him to pay the money now or else reap the consequences.

Prithvi asks for ten days' time saying he is cooking a deal and will return his money as soon as he gets it.

© Copyright tellybest.com, 2020, 2021. All Rights Reserved. Unauthorized use and/or duplication of any material from tellybest.com without written permission is strictly prohibited.
Cached Saved on: Sunday 2nd of October 2022 04:44:32 AMCached Disp on: Wednesday 5th of October 2022 05:05:22 PM