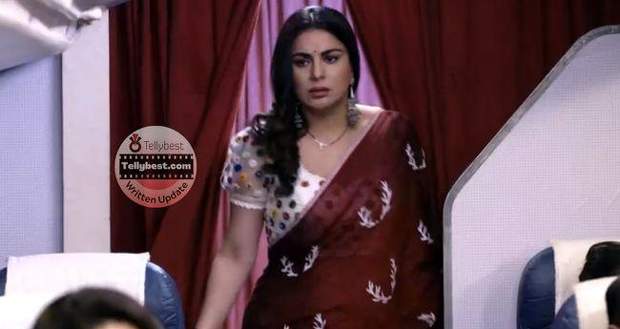 Today's Kundali Bhagya 29th December 2022 episode starts with Anjali looking at Rishabh in surprise at being invited to the commissioner's office while Rishabh tells her that he believes in moving on in life without losing their human side.

In the plane, people are discussing the snake's problems and how to control them before they gain speed.

Meanwhile, a snake crawl over the food tray in front of Rakhi shocking Rakhi and others.

Arjun shoos the snake away from Rakhi and tells her to be careful.

After a while, a tarot card reader comes to the cabin and tells everyone they are all going to die.

Meanwhile, the commissioner tells Rishabh and Anjali that his department is trying its best to save the passengers but terrorists have no heart and they can do anything with the passengers before they get to them.

Anjali gets agitated and asks Rishabh to say something more and get their guarantee as she cannot let anything happen to Arjun.

Rishabh tells her that he is equally worried and cannot force the commissioner of police.

After thinking for a while, Rishabh tells her to follow him.

Meanwhile, the pilot gets bitten by the snake while checking the wires in the cargo and runs to the cabin to get more light.

In the meantime, the magician tells everyone that they are all going to die and blames the terrorist for delaying the flight and they will get more dangerous after completely waking up.

Hearing everyone talk negatively and create a negative vibe, Preeta scolds everyone and tells them to find the solution to this problem instead of blaming others.

Arjun gets impressed with Preeta’s speech and calls her baby doll in his heart.

Rakhi wonders what Preeta’s mother must have eaten before giving birth to Preeta who is such a wonderful girl.

Hearing Shrishti tells Rakhi about her mother’s diet, Kareena scolds her for doing comedy instead of tragedy.

As Arjun suggests taking the help of the airport authority, using the terrorist satellite phone when Ashok’s alarm goes off.

Later, Ashok remembers he has something which can slow the snakes for some time however, he could not hold the snakes for long and gets bitten by them.

The junior pilot tells the terrorist to call the senior pilot as he is not able to fly the plane.

Just then the senior pilot comes to take the torch and lets two snakes inside the cabin.

The snake bites the terrorist when he tries to kill the snake with his gun.

Meanwhile, the snakes begin to move towards the passenger while Shrishti tells them that they have to find the whistle and move forward.

However, Preeta stops her and decides to go instead which scares Arjun as he starts taunting her to not think of herself as a superwoman.

Seeing Arjun and Preeta banter, Shrishti passes them by while Preeta scolds Arjun for putting her sister at risk.

Preeta again tries to follow Shrishti but Arjun follows her to keep her safe but has to retreat as the snake comes there.

Later, the air hostess suggests moving to the upper section of the plane where the snakes wouldn't have gone.

A small girl stays behind while the rest of the passengers moves upstairs.

After a while, Shrishti suggests making the wall using their luggage.

Elsewhere, Rishabh tells Anjali that they are going to the airport where his friend will help them.

Meanwhile, Anjali asks Rishabh if he loved Preeta before his marriage to her.

Later, another passenger gets bitten while making a wall with the luggage and Shrishti tells everyone to hurry or else the snakes will come inside.

© Copyright tellybest.com, 2022, 2023. All Rights Reserved. Unauthorized use and/or duplication of any material from tellybest.com without written permission is strictly prohibited.
Cached Saved on: Wednesday 25th of January 2023 06:49:27 PMCached Disp on: Sunday 5th of February 2023 03:51:35 AM