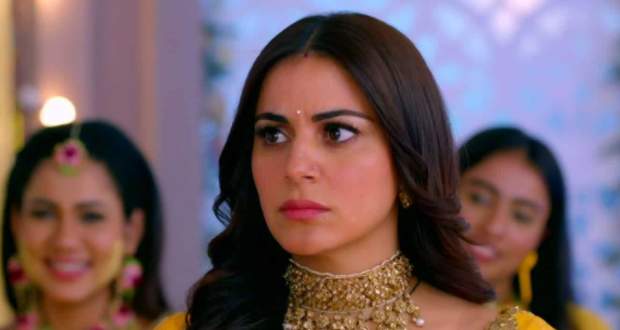 Today's Kundali Bhagya 29 January 2021 episode starts with Srishti helping Preeta wake up. She finds the pen drive and phone but the photographs are not there.

Preeta asks Srishti to come along with just a phone and pen drive. They sit in another auto while Akshay’s goon is arrested by police.

At Luthra house, Karan brings Haldi after it is touched by Mahesh to put it on Akshay and Kritika. Rakhi asks about Preeta while Karan stays quiet.

Preeta and Srishti reach Luthra house while Srishti wishes to go back home. Sameer calls Preeta and asks her to return home fast.

He says he has lied to Karan that she is planning some surprise. Sameer calls Srishti and asks her to come to Luthra house to see the drama.

Akshay wonders if Babu has killed Preeta while Preeta returns at the same time. She mocks Akshay and offers to show Akshay’s reality.

She asks someone to play the pen drive on the projector and wishes to show the true face of Akshay. Meanwhile, Sameer meets Srishti at the back gate and brings her inside.

Preeta gets the photos played on the screen but they are Akshay’s friends and family photos. Akshay gets successful in outsmarting Preeta.

Preeta is shocked as she can’t find photos on her phone as well. Meanwhile, Sarla gets the window fully locked because of Srishti’s immaturity.

Akshay praises Preeta for shedding a positive light on his character. The other family members also get impressed by Preeta’s gesture.

© Copyright tellybest.com, 2020, 2021. All Rights Reserved. Unauthorized use and/or duplication of any material from tellybest.com without written permission is strictly prohibited.
Cached Saved on: Friday 6th of August 2021 03:12:45 AM