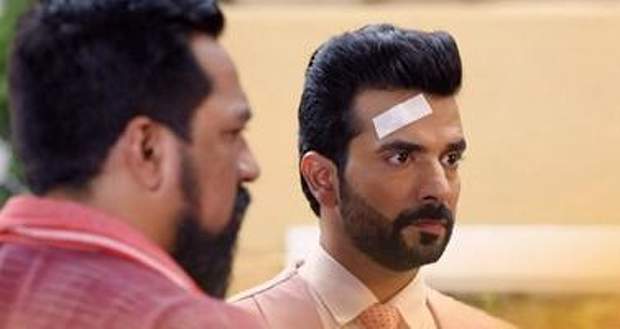 Today's Kundali Bhagya 29th July 2022 episode starts with Mahesh asking Rakhi if she had a talk with Arjun while Rakhi tells him that she sees Karan in Arjun.

Rakhi tells Kareena that she does not know what to make for Arjun in dinner.

Meanwhile, Rishabh calls Preeta many times but she is walking lost in her thoughts.

Rishabh goes to get the car while Preeta continues to walk and would have come under a car if Arjun hasn’t pulled her at the last minute.

Rishabh comes running to Preeta to see what she just escaped.

Arjun shouts at Rishabh for leaving Preeta alone knowing that she is never present where she is.

He berates him for not caring for her but should take care of her as she is his wife.

Anjali observes Arjun while Arjun avoids her eyes and goes inside.

Anjali questions Arjun for saving Preeta and that he still loves her.

Arjun tells her that he does not want to harm Preeta physically but wants to do emotional harm which takes away her sleep and peace.

Arjun tells Anjali that he will get close to Preeta and then backstab her just as she had done to him and will ruin her party tomorrow.

Meanwhile, Biji scolds the driver for driving in potholes when she gets a call from Rakhi inviting her to the party.

Meanwhile, Shrishti spots Preeta in her thoughts and tells Preeta that she will straighten Arjun if he has done anything to her.

Preeta tells her that tomorrow is her anniversary with Rishabh but she is still searching for Karan and waits for him at every instant.

Rakhi comes and tells Preeta that she understands how she feels as forgetting Karan is not possible for her.

After a while, Karan is driving and thinking about Preeta when Vishnu spots him while Raja resolves to take revenge on him.

Meanwhile, Shrishti comes to Preeta and tells her that she has been behaving weirdly ever since Panditji predicted Karan is alive.

Shrishti also tells her that Arjun has been on her mind for so long that she is torturing herself with his thoughts.

Preeta tells her that she does not like Arjun and she finds him weird.

Preeta looks at her in shock while Shrishti takes her words back.

In the meantime, Raja and his goons are planning to take revenge on Arjun the next day and decide to rope Rishabh in it too.

© Copyright tellybest.com, 2022, 2023. All Rights Reserved. Unauthorized use and/or duplication of any material from tellybest.com without written permission is strictly prohibited.
Cached Saved on: Wednesday 25th of January 2023 12:32:29 PMCached Disp on: Thursday 9th of February 2023 08:36:05 AM