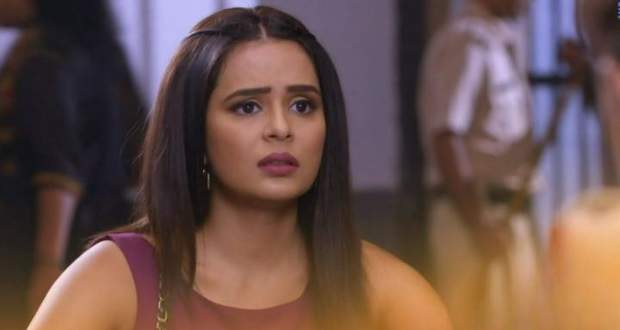 Today's Kundali Bhagya 29th June 2022 episode starts with Kavya asking Rishabh for a candy pop on their way to school.

Rishabh stops the car, drops Preeta and Kavya and goes to park the car.

Later, Preeta gets distracted by the bangles while Kavya runs away after a balloon seller and panics and stops in the middle of the road and begins to shout for Preeta.

Karan who was also nearby hears Kavya's shouts and covers a great distance to save Kavya in time.

However, Karan berates them badly and takes away Kavya with him saying they do not deserve her.

At the clinic, Karan brings Kavya to be treated for her knee injury and get a shot of tetanus. On being asked Kavya tells Karan that her name is The Kavya Luthra which shocks Karan.

Karan asks her about her father and is disappointed to hear Rishabh’s name.

Rishabh and Preeta panic and follow Karan’s car to the clinic and rushes inside.

Preeta is relieved to see Kavya well and scolds Karan for daring to touch Kavya.

Rishabh also tells him that he will have to face consequences based on his actions.

Just then the doctor comes in and tells Rishabh that it is due to Karan’s quick action that Kavya is saved.

Preeta accuses Karan of scaring her while Karan calls her incompetent mother.

Karan advises Rishabh and Preeta to try and be good parents.

Meanwhile, Rishabh thanks Karan with a veiled threat.

Unperturbed, Karan calls this all fate and tells him he wants to know why has he brought them into their life.

Meanwhile, Rishabh gets a call from Sameer and tells Preeta about tomorrow's auction which Karan overhears.

Shrishti overhears Sameer’s conversation and asks him why has he forgotten to mention the auction to her.

In the meantime, Anjali reaches Karan and scolds him for running away from her and tells him to share his thoughts with her.

She also accuses of him being changed after coming to India while Karan tells her that he is not Arjun, whom she knew.

He tells Anjali that he was thrown into the lake by his own brother and wife whom he loved the most.

He also tells her that he will take revenge on them until he is satisfied.

Anjali tells him that she will help him get his revenge because he is right to think that way and that they will punish them together.

© Copyright tellybest.com, 2022, 2023. All Rights Reserved. Unauthorized use and/or duplication of any material from tellybest.com without written permission is strictly prohibited.
Cached Saved on: Monday 21st of November 2022 07:32:35 AMCached Disp on: Thursday 8th of December 2022 01:48:56 AM