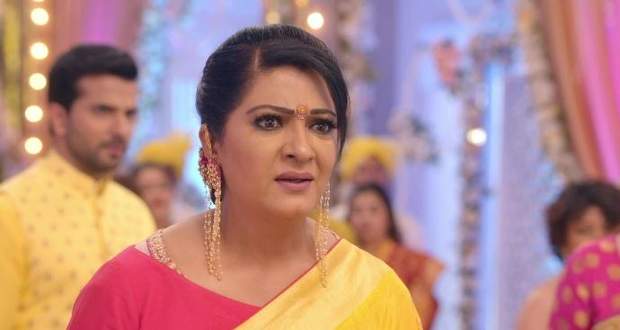 Today's Kundali Bhagya 29 March 2021 episode starts with the police inspector standing in the middle of the Luthra house with all of his workforces.

Kareena offers ACP Vijay to sit but he declines while the constable praises him for being wise.

All the Luthra family members come downstairs and Prithvi tries to talk to the ACP but stops seeing his name.

Rakhi says that the entire family is there except her mother who is injured.

Karen asks why the ACP is at their home while ACP explains that Akshay has been found dead in his hotel room.

He asks if anyone from their family has been in contact with Akshay in the past week or month while Karan, Preeta, Prithvi and Kritika wonder if they might've killed Akshay.

The ACP sees Kritika nervous and demands her to tell the truth while Kareena says that Akshay had left her at the mandap and that Kritika doesn't have any contact with him.

Rakhi tries to calm Kareena while ACP says that it is her mother's instinct while saying that murderer is someone else as he would've read their face if it was one of them.

Prithi is trembling while ACP goes towards him and drops the cup.

He apologises and circles Prithvi while Constable says that sir is suspecting Prithvi.

ACP then asks Preeta why she hated Akshay and she gives an answer but he tells her to speak the truth.

Karan tries to intervene but the ACP stops him and tells him to not intervene.

He then performs the circle on them and says that he has gotten the answers he wanted and goes advising them to celebrate Holi.

Suresh calms the Luthra's and advises them to go to sleep.

Kritika is crying on the balcony while Preeta comes there and consoles her saying that she didn't even go inside the hotel and that she would handle everything if it comes to that.

Meanwhile, Sherlyn confronts Prithvi saying that she has him coming through the window and changing his clothes but he keeps saying that he didn't kill Akshay.

Mahira's overhears their conversation from the door and runs away.

© Copyright tellybest.com, 2020, 2021. All Rights Reserved. Unauthorized use and/or duplication of any material from tellybest.com without written permission is strictly prohibited.
Cached Saved on: Tuesday 30th of November 2021 06:44:45 AMCached Disp on: Wednesday 1st of December 2021 03:15:23 PM