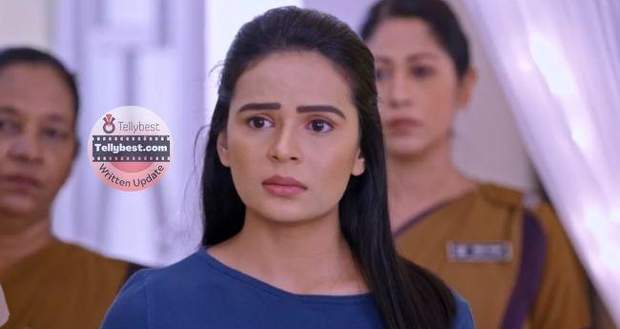 Today's Kundali Bhagya 29th November 2022 episode starts with Arjun trying to stop Preeta from leaving when her Sari gets entangled with Arjun’s watch.

All the past moments flash in front of their eyes like a movie.

Arjun tells her that she cannot separate him from her because he is in her Kundali Bhagya but he can do it whenever he wants, but for now, he has no interest in it.

Meanwhile, he tells her that he will not separate her from her world because of a misunderstanding.

Preeta tells him that she is standing between him and Rishabh and will save Rishabh from this allegation.

As Arjun decides to go to the police station, Snigdha's Dadi asks him if Rishabh has done this to Anjali.

As Arjun is telling Dadi that Rishabh can never do this, Rakhi comes with Kareena and asks him why has Anjali accused Rishabh of something so shameful.

Rakhi asks him why is he after Rishabh’s life and has asked Anjali to frame Rishabh.

Arjun tries to explain Rakhi but Kareena tells him that because of Anjali’s vile accusations, their family’s reputation is at stake and people are talking badly about them.

Arjun tries to call Anjali but she does not pick up his call.

Arjun requests Rakhi to believe in him last time but Kareena rebukes him and tells him to not play-act in front of them as she does not believe him nor does she want to see his face again.

In the cell, Rishabh is thinking about Preeta and her implicit trust in him just like his family.

Rishabh thanks God for the love his family bestowed upon him while his cellmate asks him what he wants.

Later, Rishabh talks about the father's love which comes out when they are protecting their child while the mother turns into a lioness to save her children and how his family make him feel; loved and protected.

Meanwhile, Anjali is giving her statement when her friends arrive.

After the constable leaves, Anjali tells her that she has filed a false case against Rishabh Luthra to put him behind bars.

On being asked, Anjali tells her that she is doing it for Arjun because she loves him a lot and will do anything for Arjun including fighting his enemies.

Meanwhile, Preeta comes to the police station to meet Rishabh but is asked to wait for the timings to start.

Later, Preeta calls Anjali and hearing her phone she asks to meet Anjali and is granted permission.

Anjali is telling her friend that Rishabh is not what he looks like and has done something in the past for which he should be punished.

Meanwhile, Preeta comes in and tells her that she knows that Anjali is lying and asks her if she is doing all this because of Arjun.

Elsewhere, Rakhi tells Arjun that she has never expected to say these things to him.

She reminds him of the love she showered upon him as mother and despite that he puts her son in trouble.

Meanwhile, Rakhi tells her she was wrong to assume him like Karan because he was of a big heart who always helped others and never hurt anyone.

Rakhi begs him to go back to their lives because nothing good has happened to them ever since he has come into their life.

Arjun assures them that he will put everything right but Rakhi insists on him going back.

© Copyright tellybest.com, 2022, 2023. All Rights Reserved. Unauthorized use and/or duplication of any material from tellybest.com without written permission is strictly prohibited.
Cached Saved on: Thursday 26th of January 2023 07:56:01 AMCached Disp on: Wednesday 1st of February 2023 09:04:38 PM