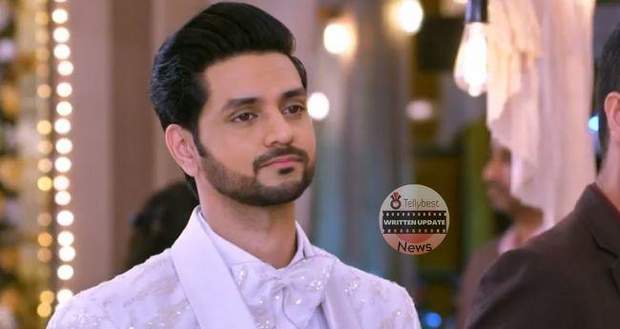 Today's Kundali Bhagya 29th September 2022 episode starts with Rakhi chuckling as she listens to Preeta complaining about how Arjun stole the 'Kajal' from her eyes and puts a tikka (dot) behind her ears.

As Rakhi says that the actions led by pure intentions are not bad, Preeta whines and stomps away from there.

Arjun comments to Rakhi that Preeta is the 'Kadvi Kareli' (bitter gourd) and Rakhi tells him that Karan used to call her the same.

On the other hand, Prithvi with his goons is driving home when the bike halts in the middle of the road due to complete exhaustion of fuel.

As the goons converse among themselves, Prithvi states to them that he is good to bad people and bad to good people.

However, Arjun, a good person, betrayed him with the facade of a bad person for which he will make Arjun pay by taking revenge.

Further, at the party, Shrishti and Sameer have their little cute couple fight with Sameer apologizing to her.

Preeta approaches them and seeing her Sameer leaves.

Shrishti gets super excited when Preeta asks her to maintain her distance from Arjun as he likes Shrishti.

Shrishti with bouncy steps goes to Biji and Janki and tells them the same thing.

As Anjali passes by hearing the conversation, Shrishti calls her out asking her to stop liking Arjun as he likes Shrishti.

Anjali goes to Rishabh showing her disappointment about him revealing her feelings to others.

Rishabh apologizes to Anjali on Shrishti's behalf and goes to the trio to tell them that whatever he said was not true.

On the other hand, Mahesh is reflecting upon Rakhi's words while staring at the bright moon.

Mahesh remembers Rakhi stating how Arjun with Karan resembles a lot while Arjun passes by and notices him.

Seeing Mahesh's sad face, Arjun makes him smile with his words the same way Karan used to while Preeta also comes there.

Mahesh tells Arjun that he looks for his Karan around the bright moon when he looks at the sky.

Arjun gets surprised as Mahesh confesses that he and the entire Luthra family sees their demised Karan in him while Preeta starts leaving after listening to Mahesh's words.

However, Mahesh stops Preeta and asks her to tell Arjun that she also sees Karan in him while she feels overwhelmed.

At the same time, Mahesh gets a call and leaves there while Arjun questions Preeta if she feels the same as other family members do.

Arjun keenly stares at Preeta who goes through her memory lane reminiscing her moments shared with Arjun.

Elsewhere, Prithvi gets home back where he meets Sherlyn who hugs her with tears flowing down her cheeks.

Prithvi emotionally manipulates Sherlyn about getting revenge on Arjun and calls his goons inside.

On the other hand, Preeta denies talking about Karan to Arjun when he softly asks her if she doesn't miss Karan.

© Copyright tellybest.com, 2022, 2023. All Rights Reserved. Unauthorized use and/or duplication of any material from tellybest.com without written permission is strictly prohibited.
Cached Saved on: Monday 21st of November 2022 07:32:17 AMCached Disp on: Wednesday 7th of December 2022 11:19:17 AM