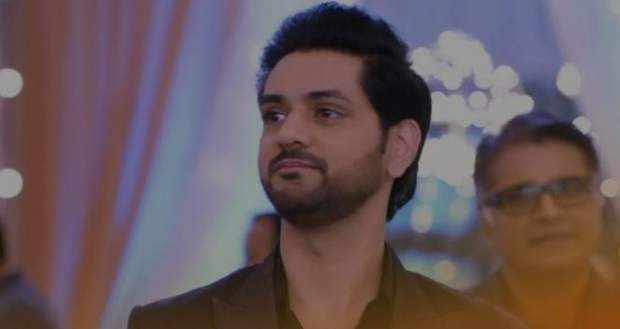 Today's Kundali Bhagya 2nd August 2022 episode starts with Arjun arriving at the party as the light goes out and the weather gets bad.

Arjun plans to turn this day into one of the worst days of their memories.

Just then he comes under the spotlight and wishes Rishabh a very happy wedding anniversary.

Arjun meets everyone and jokes to Rishabh about Preeta divorcing him on the day of his anniversary.

Later, Arjun lives his moments with Preeta of the past and becomes overwhelmed with memories.

He sees Preeta and himself in every part of the house and feels nostalgic while roaming in the house alone.

After a while, he spots Preeta getting ready and comes to stand behind her.

Preeta looks at him in the mirror and turns in shock while Arjun turns her back and releases her Saari from another shoulder telling her that this style looks better on her.

Arjun’s interference takes Preeta back in time when Karan use to do the exact same thing to her.

Coming out of her thoughts, Preeta pushes Arjun back scolding him for touching her.

Arjun realises his mistake and apologises to Preeta.

On the other hand, Kritika is trying to make Shrishti understand that Sameer has no girlfriend and that she had joked with her the other day.

Kareena comes and scolds both Shrishti and Kritka involved in a heated argument and warns them to not spoil the party’s mood.

Meanwhile, Rishabh interferes between Kareena and Shrishti and requests Kareena to not treat Shrishti badly and takes the promise from Shrishti and Kritika to not fight again.

In the meantime, Preeta tells Arjun that he has no manners and asks him to apologise to her for coming to her room without permission and adjusting her Saari.

Arjun’s replies remind Preeta of Karan and she insists on him to apologise.

After a while, Rishabh comes in and asks Arjun for being in the room.

Arjun lies to Rishabh about forgetting the way and is apologising to Preeta for that.

Preeta looks at him furiously while Rishabh calms her and tells Preeta that she is looking beautiful and puts a black dot to keep them from evil eyes.

Arjun gets angry seeing Rishabh being chummy with Preeta and asks for a glass of water.

Rishabh takes Preeta’s hand in his hand and walks out of the room while Arjun breaks the glass in anger.

Afterwards, Preeta returns to take her phone and finds Arjun cleaning his wounds and comes to help him while Arjun recalls similar moments with Preeta.