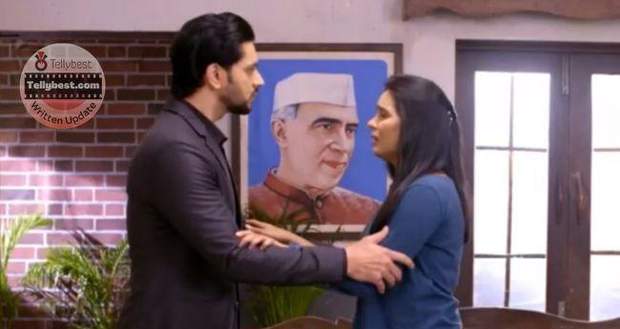 Today's Kundali Bhagya 2nd December 2022 episode starts with Priyanka coming to Anjali and telling her to tell everyone that she has been lying about molestation.

In the meantime, Arjun overhears Priyanka and shouts in anger asking Anjali if Preeta has been telling the truth.

Later, Rishabh apologises to his family for making them come here while Mahesh tells him that it is he who should apologise to him for not being able to get bail for him.

Shrishti also tells Rishabh that the lawyer Malkani already had all the details of his case which surprises Rishabh as he has not discussed anything with him.

Meanwhile, Anjali lies to Arjun again and tells him that she is talking about her statement about not drinking alcohol because she has imbibed too but does not want to look like a loose girl.

In the meantime, Rishabh tells Mahesh to take care of Rakhi and tells her that she is her strength and they will come out of this problem together.

He assures Rakhi that he will never do anything in life that brings shame to his parents or family while Rakhi tells him that she and his whole family trusts him implicitly.

Meanwhile, Arjun tells Anjali that he believes her and will support her because she is the only one who has never lied to him.

Later, Kareena is crying outside when Shrishti comes to her and comforts her.

However, Kareena rejects her support and tells her to not get close to her while Shrishti tells her that she now knows that she has so much love inside her, especially for Rishabh.

Kareena expresses her sadness about seeing Rishabh in pain and tells her that she cannot see his pain.

Meanwhile, Priyanka tells Anjali to not trust Arjun so much as he obviously loves Rishabh and Preeta is very smart and can put her in trouble.

However, Anjali tells her that Arjun is with her as he has said so and he never goes back on his words.

Anjali is confident that Preeta has never encountered a girl like her who has laid the trap with precision.

Meanwhile, Preeta tells Rishabh that they will have to get the confession out of Anjali.

Later, Rishabh tells Mahesh and Preeta that he wants to tell them what exactly happened that night.

However, Preeta tells him that there is no need because they have complete faith in him and they will only take some time in getting him out.

Later, Rishabh tells Preeta to not take too much pressure on getting him out.

Elsewhere, Arjun witnesses Dadi and Kritika being harassed by reporters and comes to their rescue.

Just then, Dadi feels dizzy and Arjun supports her but Kritika tells him that they do not need his help.

Arjun scolds her like a big brother and tells her to quietly sit in the car.

In the meantime, Preeta decides to convince the lawyer Malkani to reconsider the case.

However, at his office, Malkani tells Preeta that he is now Anjali’s lawyer and believes her side of the story.

He also tells Preeta and Shrishti that no lawyer will take Rishabh’s case now.

However, Preeta tells him that although his reputation precedes him as a lawyer who always wins but he will definitely lose this case.

© Copyright tellybest.com, 2022, 2023. All Rights Reserved. Unauthorized use and/or duplication of any material from tellybest.com without written permission is strictly prohibited.
Cached Saved on: Wednesday 25th of January 2023 05:25:29 PMCached Disp on: Wednesday 1st of February 2023 09:24:37 PM