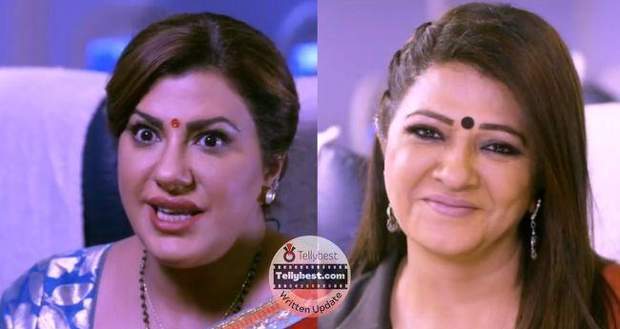 Today's Kundali Bhagya 2nd January 2023 episode starts with Arjun calling Rakhi his mom and apologising to her for causing grief to her since childhood.

Preeta tells everyone that Arjun is talking under influence of poison and is talking to Rakhi assuming her to be his mom.

Rakhi tells Arjun that she loves him more than Rishabh for he is a stubborn and naughty child.

Rakhi tells Arjun to talk to her and not sleep while Kareena wonders why is Rakhi behaving like Arjun’s mom.

Later, Shrishti tells Kareena that she is feeling worried for Arjun despite knowing him to be an enemy.

Just then Rishabh calls Preeta on the satellite phone and asks Preeta to send the photo of the snake that has bitten Arjun.

Meanwhile, Rishabh prays for Arjun to not die.

In the meantime, Rakhi tells Preeta that she has seen the snake too and will get its photo from there while Shrishti also offers to go with her.

Rakhi also tells Preeta to stay here as she is a doctor and will be needed here.

She also tells Preeta that God bestows special powers on mothers when their children’s lives are at stake.

After a while, Shrishti and Rakhi are looking for the snakes when Kareena also joins them in their search saying she is also having maternal feelings for Arjun.

While arguing with Kareena about Arjun, Shrishti accidentally captures a snake in the glove box and throws it towards Rakhi in fear.

Rakhi recognises the snake and tells Shrishti to take its picture.

Afterwards, Rakhi begins to sing a song to send the snake away saying she has seen in Bollywood movies that snakes go away after hearing the song.

Later, Kareena, Rakhi and Shrishti run away from the snake from the other side.

Meanwhile, Preeta is trying to keep Arjun awake and stops him from confessing to her that he is Karan.

Afterwards, Preeta sends the picture through the pilot that Rishabh immediately shows to the gipsy lady.

Seeing the snake, the gipsy woman tells Preeta that this snake's poison is very hard to treat and they will need vinegar to treat it.

She tells Preeta that she will have to drink vinegar and then suck the poison on it.

Fortunately, there is vinegar available on the flight and the air hostess goes to get her.

Later, Preeta tries to wake Arjun while arranging to cut mark a cut on his hand which Arjun accidentally rubs on Preeta’s forehead.

Preeta gets Arjun’s blood on her hairline and gets worried knowing its significance.

Arjun also looks at Preeta with his blood-filled hairline while Shrishti tells Preeta to focus on treating Arjun.

© Copyright tellybest.com, 2022, 2023. All Rights Reserved. Unauthorized use and/or duplication of any material from tellybest.com without written permission is strictly prohibited.
Cached Saved on: Wednesday 25th of January 2023 09:27:10 AMCached Disp on: Wednesday 1st of February 2023 10:27:07 PM