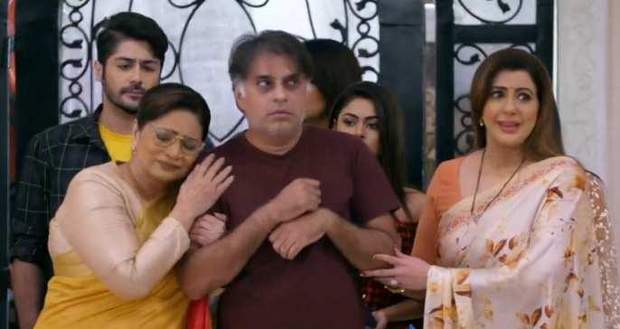 While passing soup to Karan, Preeta rudely tells Prithvi for being a nobody and having no say in what goes on in this house.

Later, Preeta asks everyone to come down for a meeting.

Meanwhile, everyone gathers in the hall and Preeta berates Kritika for not obeying her and then scolds her for not leading a purposeful life.

Preeta assigns tasks to everyone to prepare for the party and insults Sherlyn in the process.

Preeta emphasizes this being a budget party and asks everyone to be prudent in their spending.

Going upstairs, Prithvi falls while climbing the stairs and everyone rushes to help him.

In the flashback, Preeta shares her plan with Biji, for making Prithvi fall and turning the tables on him.

Everyone enquires Prithvi about his reasons for falling.

Prithvi's confession of finding stairs moving gives Preeta the opportunity to call for a doctor to send Prithvi to the basement.

Prithvi snatches her phone but Preeta creates a drama out of it making everyone suspicious of Prithvi.

Also, she is ready to get Prithvi tested if needs be to keep everyone safe from his violent behavior.

Finding himself trapped, Prithvi apologizes to everyone for misunderstanding and admits to being wrong about Mahesh.

In Mahesh’s bedroom, Rakhi sees Mahesh and Girish talking and is happy to realize that Mahesh remembers Girish.