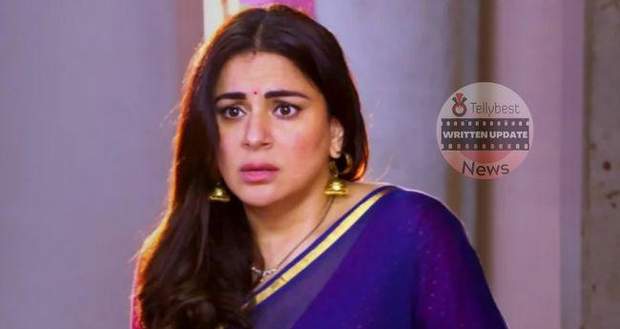 Today's Kundali Bhagya 2nd November 2022 episode starts with Rishabh telling Shrishti that he is concerned about Preeta more and so is Kavya.

Shrishti tells Rishabh to take care of the terrorist so that his friends do not catch him.

However, the terrorist has escaped.

Meanwhile, Prithvi asks one of the terrorists to call more people as there are some dangerous people coming there.

He also asks him to bring Kavya where they are because she will work as their shield.

Outside the school, the media sings praises about officer Waghmare who is a supercop.

Just then, Inspector Waghmare arrives and asks the media to let them do their job.

Waghmare tells another officer that they cannot delay taking action now and asks his team to get ready for action.

Meanwhile, Preeta hides seeing the terrorist who received the message.

Seeing Preeta, Arjun thinks with hatred about how he kept away from his daughters for so many years.

Just then he overhears the terrorist and gets annoyed with Preeta for not even knowing how to hide properly.

At the same time, the terrorist sees Preeta and asks her to come out.

Seeing Preeta in trouble, Arjun had to help her and he attacks the goon whose gun slides to Preeta who picks it up and fires at them but could have hurt Arjun who was standing behind the terrorist.

Later, Arjun beats the goon and takes Preeta away.

Preeta shouts at him for causing the problem and tells him that he cannot imagine what she is going through knowing her daughter is unsafe.

Arjun gets angry and tells Preeta that Kavya is his daughter and not like a daughter and she is responsible for all this because she had almost killed him.

Preeta misunderstands him thinking he is talking about a misfire just now and tells Arjun that it was an accident and goes to search for Kavya swearing Arjun of her mother to leave them alone.

Meanwhile, Anjali comes to Arjun and asks him what is wrong now.

In the meantime, Waghmare calls Prithvi and warns them to leave peacefully but Prithvi continues to make fun of him.

Later, the police unlock the school gate and attack them.

In the meantime, Preeta sees Rishabh and asks him if he found Kavya.

In a panic state, Preeta tells him that if something happens to Kavya she will die and asks him to find Kavya.

Later, Arjun is reliving all the past moments when he and Preeta made plans together.

After a while, he tells Anjali that Kavya is his daughter and he loves her a lot and Preeta also loves her so much that she risked her life to save her.

He asks Anjali if Preeta is doing it because Kavya is his daughter her only living connection to Karan.

Anjali tells Arjun to not misunderstand Preeta and that she has used Karan’s child to marry Rishabh otherwise why would anyone allow Rishabh to marry Preeta?

Arjun thinks Anjali is right and tells her that he is going to save Kavya now and deal with Preeta later.

Meanwhile, Anjali is worried about Nidhi and what will she say.

© Copyright tellybest.com, 2022, 2023. All Rights Reserved. Unauthorized use and/or duplication of any material from tellybest.com without written permission is strictly prohibited.
Cached Saved on: Monday 21st of November 2022 03:04:03 AMCached Disp on: Tuesday 29th of November 2022 10:19:55 AM