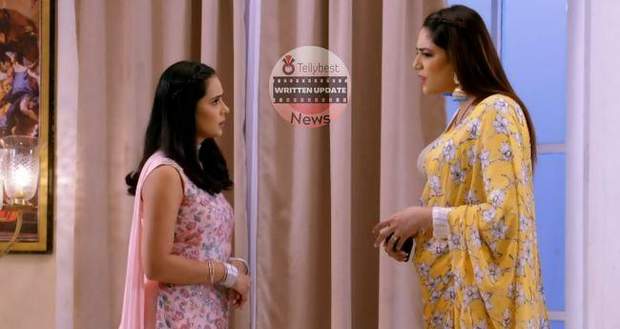 Today's Kundali Bhagya 2nd September 2022 episode starts with Rakhi brings Arjun to Preeta’s room while explaining to him that she has got Preeta’s room cleansed so that she can get the happiness she deserves.

Arjun does not like Rakhi’s unquestionable trust in Preeta and warns her to not trust her to the extent that if she betrays her then she cannot bear it.

However, Rakhi tells her that Preeta is like a daughter to her and reminds him of Karan.

Rakhi also tells him that Karan would have fought with her for giving more importance to Preeta but would have rejoiced inwardly as he was the master of hiding his feelings just like Arjun is doing now.

Arjun gets puzzled and tries to defend himself but got interrupted by Preeta.

Meanwhile, Shrishti gets jealous seeing Anjali and Sameer together and brings her in front of Lord Ganesh to question her intentions.

Anjali gets annoyed and tells Shrishti that she is in love with someone else.

On the other hand, Arjun tells Preeta that she does not need to know everything while Preeta clenches her teeth and tells him that if anything concerns her then she needs to know.

Arjun gets baffled at Preeta’s comeback while Rakhi tells Arjun to not tease her.

Arjun feels offended and tells Rakhi that she is taking Preeta’s side and asks Preeta if she takes bitter gourd juice for breakfast.

Arjun tells Rakhi that she is like this and he knows her very well rather better than everyone.

However, Preeta tells him emotively that it was only Karan who knew her completely.

Fearing to hurt Rakhi, Preeta changed the subject and call Arjun weird which angers Arjun and he walks out of there.

In the meantime, Rishabh tells Sameer to call Arjun in the study to sign the contract.

Later, Rakhi is enjoying Preeta’s venting her anger on Arjun for being the worst guest ever.

However, Rakhi tells her that her fight with Arjun reminds him of Karan and her fight.

Preeta gets calm and tells her that it is Arjun who fights with her otherwise she is the most composed person.

As Preeta is going to get tea for Rakhi, Arjun comes back with a cup of tea and says exact same thing that Karan use to tell her.

Preeta looks at Arjun caring for Rakhi and tears filled her eyes.

Meanwhile, Prithvi is searching for Arjun and Preeta while running a commentary on other family members.

Just then, Preeta, Arjun and Rakhi come to the veneration hall where Dadi asks Arjun to dance for Lord Ganesh while Rishabh and Sameer also join him.

© Copyright tellybest.com, 2020, 2021. All Rights Reserved. Unauthorized use and/or duplication of any material from tellybest.com without written permission is strictly prohibited.
Cached Saved on: Friday 30th of September 2022 08:02:28 PMCached Disp on: Saturday 1st of October 2022 05:41:24 PM