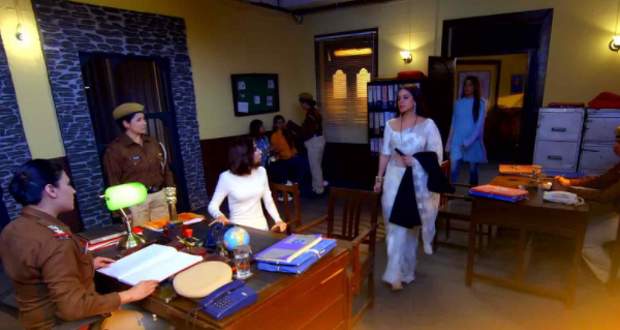 Today's Kundali Bhagya 30 December 2020 episode starts with Preeta’s flashback revealing that she called inspector Rawat to get Mahira arrested. She had told the inspector that Mahira is trying to trap Karan.

The inspector had also freed Preeta and Srishti and asked Sameer to stay with Karan. Meanwhile, the inspector wishes to send Mahira to Sudhar Grah.

Mahira tries to prove that she is Karan’s wife. Preeta comes and reveals she is the legal wife of Karan.

She also shows the photo and video of their marriage. Mahira says that Preeta has forcefully married Karan.

Preeta reveals Karan has accepted her as a wife. Mahira needs Sherlyn’s help while Srishti reveals she had talked to the inspector.

Sherlyn wakes up and finds Preeta and Srishti missing. She calls the inspector and learns Mahira is being called an escort.

Sherlyn calls Kareena and seeks help. Meanwhile, Mahira learns that Preeta has seen the live footage of Mahira and Karan.

Sherlyn reaches the police station to save Mahra while she is proven wrong and the inspector doesn’t listen to her.

Srishti warns Sherlyn and threatens to send her to jail. Preeta says she is saving Sherlyn just because she is pregnant.

Srishti rebukes Mahira and threatens to upload the video of her on social media.