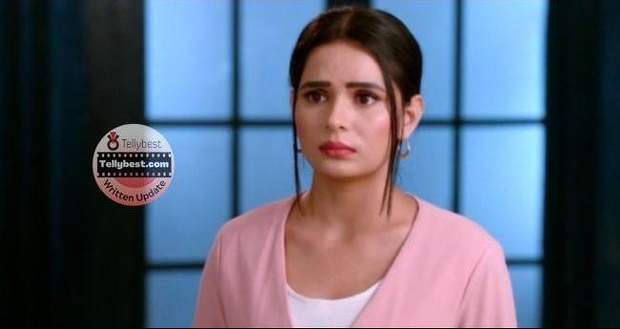 Today's Kundali Bhagya 30th December 2022 episode starts with Preeta and others trying to make space by shifting the luggage so that they can stay safe from the snakes.

A man says that the snakes will kill everyone to which Rakhi says that they should not disrespect snakes as they are the form of Lord Shiva.

Srishti agrees with Rakhi and says that the terrorist died because he was an evil person.

Kavya notices that Priyu is not present there and goes off to search for her.

Mr. Khurana asks others to give him a seat to sit which triggers Kareena as they are all trying to close the entries to that chamber.

Kareena asks Mr. Khurana to stop being so rude and says that it is business class and does not have many seats.

Srishti notices that both Priyu and Kavya are not there and asks Preeta and Arjun if they know about their whereabouts.

Mr. Khurana says that Kavya was asking him about Priyu which makes it clear that she has gone to the other chamber to search for Priyu.

Kavya comes to Priyu and asks her to come with her but Priyu refuses as her mother has asked her to stay in her seat and will not be able to find her if she moves.

Priyu says that there are snakes outside while the snakes crawl toward them from the other side.

Before one of the snakes attacks Priyu and Kavya, Preeta saves them and asks them to get out of there.

Kavya gets stuck in a corner and gets surrounded by snakes when Arjun comes to her rescue and gets rid of the snakes.

While trying to throw away a snake, Arjun gets bitten by them but remains silent.

After bringing the children to the safe side, Preeta and Arjun get a bit relieved but some snakes enter that chamber and bite a few people.

Preeta rushes to the cockpit and asks the pilot to open the door but the terrorist refuses to do so.

The pilot tells Preeta that they cannot land the plane due to some technical difficulties as Preeta requests them to do something quickly.

The pilot informs the authorities that the plane is full of snakes and asks them to take some action to resolve the issue.

Meanwhile, Rishabh and Anjali meet officer Sushant and head to meet a lady who knows about snakes and their treatments.

Rishabh says that the day is very weird to which Anjali agrees and replies that she would have imagined being thankful toward him.

At the same time, Preeta notices that Arjun does not look fine and discovers that he has been bitten by a snake.

Preeta ties her saree to Arjun’s arm to stop the poison while Kavya says that Arjun got bitten while trying to save her.

Rishabh assures Preeta that they are coming to help her after she tells him that Arjun got bitten by a snake while saving Kavya.

Rishabh, Anjali, and officer Sushant reach the lady’s residence but she refuses to help them as the government is accusing her falsely.

Rishabh requests the lady and says that his whole family is stuck and the person who saved his daughter has been bitten by a snake.

The lady agrees to help Rishabh and asks them for the picture of the snake so that she can tell the treatment.

Meanwhile, Rakhi takes care of Arjun as he slowly starts to lose consciousness.

Arjun calls Rakhi “mom” which shocks everyone in the Luthra family and Rakhi gets emotional.

© Copyright tellybest.com, 2022, 2023. All Rights Reserved. Unauthorized use and/or duplication of any material from tellybest.com without written permission is strictly prohibited.
Cached Saved on: Wednesday 25th of January 2023 11:28:58 AMCached Disp on: Tuesday 31st of January 2023 07:50:30 PM