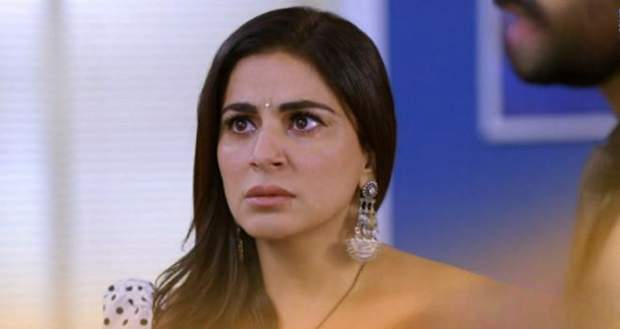 Today's Kundali Bhagya 30th June 2022 episode starts with Biji looking at Karan's picture on the news and getting emotional while Rakhi comes there.

Biji tells Rakhi how Preeta and Rishabh are planning the auction of Karan's cricket belongings the next day as it's his 5th death anniversary.

Elsewhere, Prithvi is gambling with his friends while one of his friends shows them money and reveals that he is planning to buy a secondhand car with it.

Prithvi lies that he had money but spent it on his wife while the tea seller comes there with snacks and tea.

Prithvi learns about the auction from the newspaper in which the snacks are wrapped and forms a plan to buy Karan's bat.

Prithvi steals the money and leaves there thinking that he will destroy Karan's bat in front of the Luthra family.

Back at the Luthra house, Preeta tries to get Kavya to sleep and tells her the story of her and Karan.

On the other side, Rakhi requests Mahesh to help her count of the money and reveals that she sold her jewelry to get the money.

Mahesh asks her the reason for it and Rakhi reveals that she was thinking of buying Karan's things at the auction.

Meanwhile, Arjun is on call while a girl is seen admiring him.

Elsewhere, Anjali comes to her and tells her to not stare at him as he is Nidhi's fiance.

Just then, Dadi comes there and tells Arjun and Anjali to stay.

Anjali agrees to it which makes Arjun angry.

Elsewhere, Rishabh orders his secretary to get information about Arjun by the next day.

Samir comes and asks him what is happening while Rishabh reveals that Arjun followed Preeta the previous day and had even reached Kavya's school.

Rishabh reveals that he's missing Karan and that Karan would have taken better care of Preeta and Kavya than him.

Samir also gets emotional while Rishabh orders him to not reveal their emotional moment.

Meanwhile, Anjali manages to convince Arjun to stay there by telling him that it will be beneficial to his revenge plan against Preeta and Rishabh.

Arjun wonders out loud how he will make his entry into the Luthra family's lives and Anjali shows him the ad about the auction happening the next day.