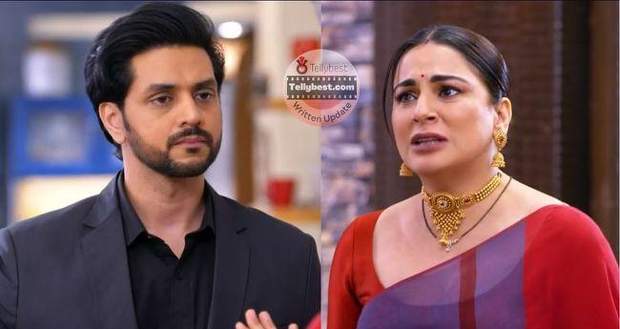 Today's Kundali Bhagya 30th November 2022 episode starts with Arjun going to the police station when Snigdha’s Dadi asks him why is he believing Rishabh over Anjali.

Arjun tells her that Rishabh is not that kind of a person but he knows Anjali is also not wrong.

He tells her that he will go to the police station and then things will get clear for him.

At the police station, Preeta asks Anjali why is she doing this and how much money has Arjun promised her.

Preeta tells her that Arjun is a bad person and is very bad for her family.

Meanwhile, Anjali tells Preeta that she has not asked her even once what has happened to her.

She narrates to Preeta in a very emotive way how Rishabh offered her the lift home and insisted on seeing her study.

She also tells her that Rishabh tried to force himself on her and she let him in the house thinking that he is a nice and decent man.

Meanwhile, Preeta tells her to stop at once and that she will not believe her even if she repeats the truth a hundred times.

On being interrupted by Anjali’s friend, she tells her that she is not her best friend as she cannot see through her lies.

She also tells her that she will prove her lies and then she will suffer the way Rishabh and her family is suffering.

Later, Anjali goes to the inspector and tells him that Preeta is threatening her while the inspector tells Preeta to go meet Rishabh and tells Anjali that she is taking everything wrong because she is hurt.

Later, Arjun comes there and asks to meet Anjali and Rishabh both.

Meanwhile, Rishabh tells his cellmate that he has full faith in the law and has experienced it.

Meanwhile, Rishabh tells her that he has full faith that she will bring him out and prove his innocence.

In the meantime, Anjali tells Priyanka (her friend) that she does not think of anything else and how much she tries to control herself but nothing works.

Just then Arjun comes there and asks Anjali what has happened and why was she not answering his calls.

Anjali tells her in a tearful voice that she has been molested.

However, Arjun tells Anjali that she has misunderstood Rishabh because he can never do such a vile thing.

Anjali gets angry at Arjun and dramatises the situation telling him that she has been right to not contact her because he would not have believed her.

She paints an ugly picture of Rishabh where he forced himself upon her asking her what Arjun has that he does not.

She also shows marks on her arms and neck to prove what she has been through.

Arjun could not resist the marks on Anjali's body and tells her that he believes her and will get justice for her.