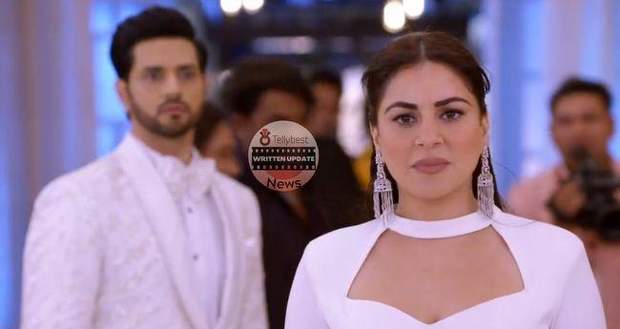 Today's Kundali Bhagya 30th September 2022 episode starts with Arjun offering his hanky to Preeta to wipe her tears and asks her if she crying because she feels hurt or because she has hurt Karan which she should not have done.

Preeta gets agitated and tells him that she does not want to talk to Arjun about Karan.

Arjun asks him why can she not talk if she loves Karan.

Preeta gets angry and tells him that she does not want to explain her love to him because Karan knew how much she loves him and that is enough for her.

Arjun questions her remarrying after a few days despite the great love she has for Karan.

Preeta refuses to answer and leaves.

Arjun kicks the chair to vent his anger and tells her that her eyes are not of love or pain but are of embarrassment.

Arjun vows to make this night so memorable for Preeta and Rishabh that they will never forget the wounds of tonight's party that will embed on their hearts and will pain them again and again for years to come.

Arjun smiles at Shrishti's innocence and tells her that Preeta must have told her to stay away from him.

Shrishti gets emotional and tells him that she gets a good vibe from him and she feels safe with him as if her heart knows that he will never harm anyone.

Arjun recalls his Pendrive and tells her to not trust him too much.

After a while, Sameer comes to call Arjun for the conference and asks Shrishti to stay away from Arjun.

In the meantime, Preeta locks herself in a room and wonders why Arjun reminds her of Karan.

She tells herself that thinking about Arjun is wrong but she finds herself helpless to think about him.

Meanwhile, Mahesh, Rakhi and Rishabh are praising Arjun to the media and calling him family.

Some journalist questions Rishabh about the business rivalry between Suryavanshi and Luthras.

Arjun joins the conversation and tells the media that for them saying “keep your enemies closer" fits perfectly.

Rishabh feels offended and tells him that he never imagined that he will ever call him his enemy.

Rishabh tells the media that Arjun is merely joking.

Later, Shrishti comes to them and tells the press to keep the questions for later and requests Rakhi and Mahesh to present a dance performance to keep the party happening.

© Copyright tellybest.com, 2022, 2023. All Rights Reserved. Unauthorized use and/or duplication of any material from tellybest.com without written permission is strictly prohibited.
Cached Saved on: Monday 21st of November 2022 09:18:21 PMCached Disp on: Wednesday 7th of December 2022 11:45:13 AM