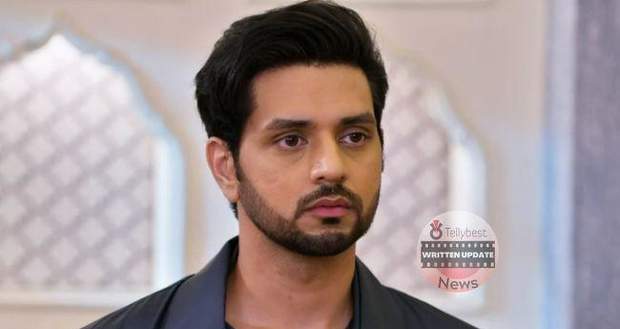 All three of them take the names of some celebrities and leave making Dadi think that they are crazy people.

Meanwhile, at the Luthra house, the ladies are making preparations when they hear the sounds of dhol and get excited.

The Luthra brothers come with the statue of Ganeshji and everyone dances.

Suddenly, the statue is about to fall but Arjun and Rishabh save it as the celebration continues.

Afterwards, they do the welcoming aarti of Ganeshji's statue while Arjun gets annoyed seeing Preeta and Rishabh doing the aarti together.

When Preeta isn't noticing, Arjun comes forward and does the aarti with Preeta while Rishabh stands back.

Preeta notices him and lets go of it feeling embarrassed while Anjali comes forward and does the aarti with Arjun.

Rakhi tells Arjun that she's very happy he came and tells him that he is just like family to her.

Later, Preeta is coming out of the kitchen holding a tray of juice glasses when she bumps into Arjun.

As Arjun saves the juice from spilling, Preeta sees that his hand is touching hers and yanks at it imbalancing the juice which falls on Arjun's dress and shoes.

Preeta pretends to blame everything on Arjun and goes to get tissue papers to clean the floor while Arjun looks at her angrily for not caring about his shoes and dress.

Meanwhile, Dadi asks Kritika about Prasad while Kritika vents her anger about delaying the delivery of Prasad for so many years.

Just then, Rakhi asks Dadi to get Preeta’s room cleansed by Pandit Ji.

After a while, Prithvi comes with his friend to the Luthra house and uses him as a shield and stands beside Mahesh, Sameer and Rishabh.

Rishabh is telling them that he has undertaken Arjun as a business partner.

Dadi gets pleased to hear the news while Sameer tells them that they will sign the contract today on the auspicious occasion.

Prithvi decides to change his getup before any Luthra recognises him.

Kritika becomes suspicious of Prithvi and follows him.

Meanwhile, Rakhi invites Panditji to Preeta’s room to cleanse it so that Preeta gets all the happiness in life.

After a while, Arjun and Preeta banter with each other while Arjun blames Preeta for spoiling his clothes and not offering him help to clean them.

Preeta tells him cleaning the floor is important as people might slip on them.

Being annoyed at Preeta's explanation Arjun hands over the tissue box to Preeta saying he does not need it anymore.