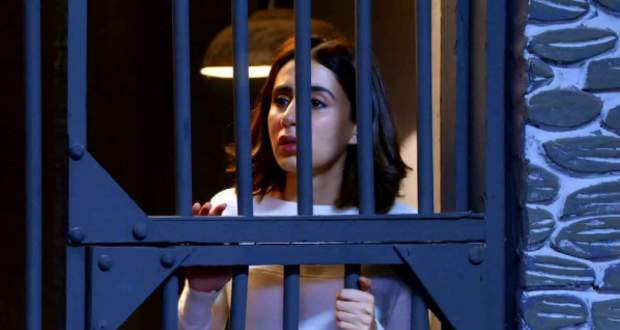 Today's Kundali Bhagya 31 December 2020 episode starts with Srishti pointing Sherlyn’s mistake of leaving the tablet with them. She reveals that Preeta dialed a video call in the police station.

Sherlyn calls Prithvi and accuses him of saying the wrong things at the wrong timing. They both get into an argument while Prithvi learns Karan and Preeta didn’t get close.

Kareena reaches the police station with her lawyer to bail out Mahira. Ramona also reaches there and rebukes Mahira for taking the wrong step.

They get her out on bail while Kareena is also disappointed with Mahira’s actions. Ramona wishes to file a complaint while Sherlyn stops her.

She reveals that Mahira gave a drug to Karan and the video footage is with Preeta. Meanwhile, Karan gains consciousness while Srishti tells him that Preeta is crying.

Karan thinks he has done something wrong with Preeta and goes to apologize to her. Preeta gets confused and wonders why Karan is thinking this way.

He reveals that Srishti told him while Srishti’s prank comes out in open. Karan wants to know about the events of the previous night.

Preeta promises that she will tell him everything on their way back. Meanwhile, Mahira is attacked by the media and is called an escort.

The receptionist meets Karan and gives him flowers. She also hugs him while Preeta doesn’t react.

Karan and Preeta leave in a cab and Karan wants to know if she felt jealous. Preeta is confident that Karan treats his fans as just fans.

© Copyright tellybest.com, 2020, 2021. All Rights Reserved. Unauthorized use and/or duplication of any material from tellybest.com without written permission is strictly prohibited.
Cached Saved on: Tuesday 2nd of March 2021 12:35:12 PMCached Disp on: Sunday 7th of March 2021 05:04:04 AM