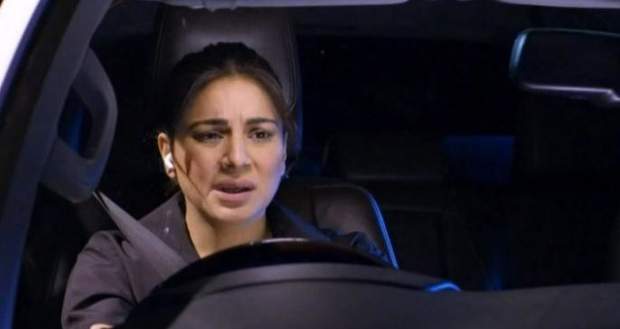 Today's Kundali Bhagya 31st May 2022 episode starts with Natasha telling Sherlyn about her perfect plan. She also tells Sherlyn that she will reward her handsomely if she proves her worth to her.

Meanwhile, Karan gets ready to go down while Shrishti and Sameer plan to stop the marriage by hook or by crook.

After a while, Natasha comes down and is praised by Kareena and Dadi.

Later, Karan also comes down and sits in the Mandap.

Dadi asks Rakhi about Pandit while Shrishti and Sameer pay off the Pandit to not come inside.

However, Natasha messages Prithvi to arrange for a Pandit and soon a standby Pandit comes and begins the marriage rituals.

Shrishti and Sameer plan to break the mandap to delay the wedding.

After a while, Natasha again reminds Karan to focus on the plan and insists on performing the rituals.

Just then Rishabh comes to the gate of Luthra Mansion while Preeta pays off the taxi driver.

Preeta observes the decorations of the house and gets worried and runs inside.

Meanwhile, Pandit Ji asks Karan and Natasha to put Warmala on each other.

Natasha hurriedly put on the Warmala while Karan waits for Preeta.

At the same time, Prithvi boasts about his wins and tells Sherlyn that they have finally won and got all they wanted.

Sherlyn also advises Prithvi to go to Dubai and gets all the paper signed by Rishabh.

Just then pandit Ji asks Karan to put the Warmala on Natasha.

Karan is about to put Warmala on Natasha when Preeta comes in and stops him.

Karan stops but Natasha insists on him saying that Preeta has yet to stop the marriage.

Karan looks desperately at Preeta to stop him.

Just then Rishabh enters the house and a wave of happiness is spread in all the Luthra members while Prithvi and Sherlyn are gobsmacked to see Rishabh.

Rishabh moves towards Karan and slaps him for marrying Natasha while Karan hugs him with happiness.

Mahesh also hugs him while Rakhi cries with happiness.

Prithvi is in shock and is finding it unbelievable to see Rishabh in the Luthra house.

Afterwards, Karan fights with Rishabh for leaving them alone while Rishabh explains to them that he was trapped in a fake drug case.

© Copyright tellybest.com, 2020, 2021. All Rights Reserved. Unauthorized use and/or duplication of any material from tellybest.com without written permission is strictly prohibited.
Cached Saved on: Friday 1st of July 2022 09:33:20 AMCached Disp on: Saturday 2nd of July 2022 08:44:52 PM