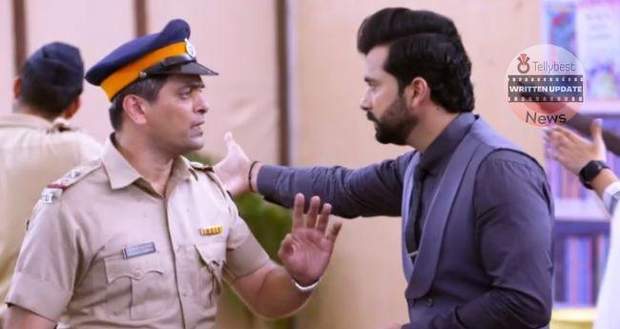 Today's Kundali Bhagya 31st October 2022 episode starts with Prithvi laughing at the camera and begins to play with it.

Prithvi after discovering the hidden camera with the undercover cop calls up the inspector and taunts him saying that he has identified his undercover cop and now the consequences are going to be dire.

Meanwhile, Preeta and Arjun are finally able to cut off their ropes with the help of the blade.

Prithvi continues speaking to the police and tells them that the inspector underestimated his intelligence.

The inspector angrily asks him to reveal his informant who is leaking all this information from the outside but gets no answer from him.

The police then ask him as to what his demands are and Rishabh pleads with Prithvi to see reason and release the kids, or the implications of hurting the kids would be awful for him.

Prithvi shouts at the undercover cop and tells her that since his demands aren't being met, he is now going to do something drastic.

Arjun takes advantage of the commotion and gets hold of a gun, and tells the terrorists to back off, while Preeta holds the kids, and the terrorists have a face-off with Arjun.

Meanwhile, Preeta takes the kids and runs from the school, and guides the kids toward safety.

The terrorists run behind Arjun and Kavya which is when Preeta realizes that Kavya isn’t with her but with Arjun and she tries to find them.

In the meantime, Arjun tells Kavya to take care of the kids as he is going to find Preeta.

But before Preeta can reach Kavya, the terrorists catch ahold of her, and Preeta pleads before them to help find her daughter.

The terrorists grab Preeta’s hands and at that very moment, Prithvi shouts at them to never touch Preeta again.

On the other hand, Rishabh tells the police that he would now negotiate with the terrorists as the police are incompetent when Sherlyn stops him.

Rishab tells her to stop bothering him and tells her she means nothing to him anymore, and Sherlyn decides that she would by any hook or crook become his wife again.

In the meantime, Prithvi tells the terrorists to take care of Preeta. Arjun tries to save her but gets caught in the process.

Shabbir tells Prithvi that Preeta will now be ousted from the school, but Prithvi tells him that she won’t even step foot outside the class without Kavya.

Meanwhile, Arjun is tied up by the terrorists, and he is trying to hatch a plan to save both Preeta and Kavya.

© Copyright tellybest.com, 2022, 2023. All Rights Reserved. Unauthorized use and/or duplication of any material from tellybest.com without written permission is strictly prohibited.
Cached Saved on: Monday 21st of November 2022 02:55:42 AMCached Disp on: Thursday 1st of December 2022 02:03:33 AM