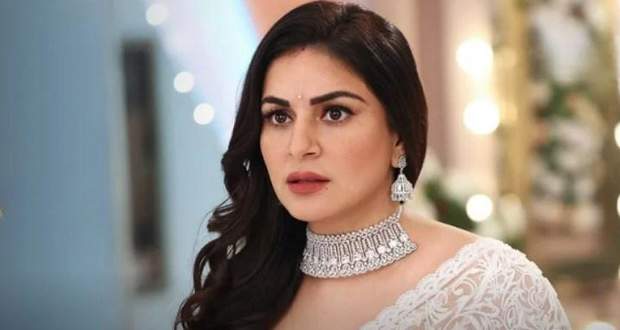 Today's Kundali Bhagya 3rd August 2022 episode starts with Preeta cleaning Arjun's wound gently while he remembers his moments with her and feels agonized.

Preeta notices his stare and asks him what he is thinking while mocking him for not thanking her.

Arjun feels challenged and tells Preeta that he saved both her and Rishabh a while back which creates an argument between them.

Arjun calls her a bad host and tells her to go to her husband who might get jealous after which he himself leaves.

Preeta feels extremely annoyed at Arjun's words and prays that she doesn't kill him.

Later, Arjun bumps into Rakhi and Mahesh who get worried about him seeing the injury in his hands.

However, Arjun makes up an excuse and lies that he got burned by the candle as Rakhi drags him to the kitchen to give him turmeric milk.

Back at Nani's house, the goons are about to attack Anjali but Nani and others arrive at the same time ruining their plan.

Anjali bids the Nani goodbye as she leaves for the party.

Elsewhere, Rishabh is telling Sameer to stay loyal to Shrishti and guiding him while Preeta comes there and informs him about Arjun's injury.

Preeta asks him if he's not jealous and Rishabh calmly informs her that they both know the boundaries and limitations of their relationships and that he trusts her.

At the same time, the goons follow Anjali and call up help to capture her effortlessly.

Rakhi gives Arjun the Besan Laddoos and anticipates his reaction.

Arjun gets emotional as he recalls the memories along with the taste while Mahesh comes there and tries to snatch a few laddoos from them.

Shrishti comes there at the last moment and tells them that the dance party is about to start.

Mahesh and Rakhi leave while Arjun hides the laddoos in the microwave and leaves.

However, as he is leaving, Arjun bumps into Kavya and gets absorbed in his memories noticing the necklace she is wearing.

Flashback shows Karan flirting with Preeta and gifting her the necklace while he complains that it is a little tight around her neck.

However, Karan tells her that they will give this necklace to their daughter and he will buy her a new one.

The flashback ends as Arjun stops Dida from going after Kavya and asks about the necklace.

Dida lies that Rishabh got her the necklace which makes Arjun angry.