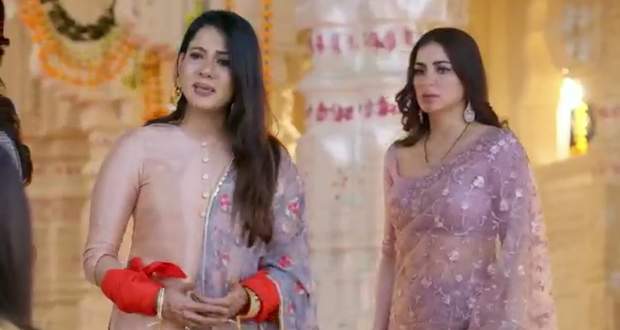 Today's Kundali Bhagya 3 February 2021 episode starts with Akshay calling Megha to meet him in front of her house.

Rakhi tells Sameer to give shagun at Akshay's house. Sameer sees Akshay hugging Megha and wonders how clever Akshay is, he knows Megha beforehand, created a scene, and blamed Srishti with the help of Megha at the cocktail function.
Meanwhile, Sherlyn, Kritika, Kareena, Rakhi, and Preeta go to Kul Devi Mandir. The priest tells them to pray good wishes for the marriage ceremony.
Sameer follows Akshay and he gets shocked to see Akshay taking Megha to the hotel room. He feels very bad, doesn't want his sister's life to be spoiled, and decides to teach Akshay a lesson.
Preeta wishes Kritika's life to be saved from Akshay while Sameer calls Preeta to inform that Akshay is with Megha at the hotel.
Sameer informs Preeta about Akshay's conduct, she tells him to keep an eye on Akshay while she brings everyone over there and tells Srishti to help Sameer.
Preeta tells everyone to come along with her and see Akshay's real face so that today's marriage could be saved from happening.
It infuriates Kareena and she tells everyone not to trust Preeta.
Kritika gets double-minded and she says that Preeta is her well-wisher.
Kritika says that she has doubt in her mind regarding Akshay, they must go, see and clear their doubts so that foundation of their relationship could be laid on trust and love.