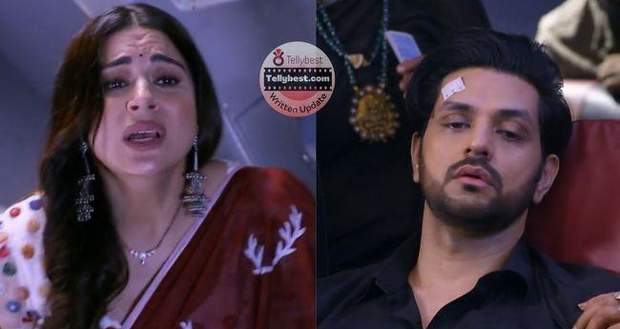 Today's Kundali Bhagya 3rd January 2023 episode starts with the gipsy woman telling Rishabh that a person who has any knowledge about it should only perform the procedure otherwise it can kill the person while draining the poison.

Rishabh dials back and tells Shrishti to not do it and asks someone who has any knowledge about it else it can kill her.

However, Preeta continues to suck the blood out of Arjun despite Arjun’s efforts to snatch his hand away from Preeta.

Anjali also prays for Preeta’s efforts to be successful.

Later, Preeta feels droopy and Shrishti comes to her help.

Preeta takes some medicine with water while Arjun asks after her.

Arjun feels better and wants to comfort Preeta but feels helpless and thinks of all the moments of the past with Preeta.

Later, Arjun walks away from there while Rakhi sends a prayer of thanks for saving them.

After a while, the gipsy woman tells Rishabh and Anjali that they have a solution to once again put the snakes to sleep.

Rishabh and Anjali make haste in understanding the woman and begin to make plans to transfer the powder to that plane while Rishabh offers to go.

However, the gipsy woman rebukes Rishabh for his haste and tells them that all the ingredients will be in the cargo of the plane and they only need to send the list to Preeta who will definitely find everything and save everyone.

Later, Rishabh tells Anjali that Arjun is saved by Preeta and all this could have been avoided if Arjun did not become their enemy.

He also tells Anjali that there is a wall of misunderstanding between them that is causing differences between them.

He asks Anjali to tell him what she knows and why Arjun hates them so much.

In the meantime, Arjun is confused about being saved by Preeta despite him being her enemy.

Arjun thinks about Preeta’s goodness and how she has saved him knowing he wants to kill Rishabh.

He is not able to understand how could Preeta kill Karan if she cannot see her enemy die.

Arjun’s feelings of love are once again evoked and he realises that he still loves Preeta.

After a while, the officer tells Rishabh that he has sent the list to the plane and tells them to get the things from the cargo and use the mixture in water to spray on snakes.

Later, Anjali connects with Arjun and tries to instigate him against Preeta saying that he is on the flight because of Preeta and that if Preeta would not be there then someone else would have helped him.

However, Arjun rebukes Anjali for saying things against Preeta and tells her that only he can say anything to Preeta but he will not tolerate her badmouthing her.

Anjali gets jealous and asks Arjun if he has again fallen in love with Preeta.

Arjun admits to loving Preeta and disconnects the call.

However, he is shocked to see Preeta on the other side of the door.

Preeta and Arjun look at each other for some time but Arjun pulls Preeta to himself in a sudden movement making Preeta angry.

However, Arjun shows her the snake as justification but Preeta pushes past him.

Later, Preeta and Arjun begin to banter with each other while Shrishti and later Rakhi join them in their search.

Preeta and Arjun try to send them back but they remain stubborn and tell them that they will find things as a team.

Just then Preeta spots the chemical box and is about to pick it up when Arjun pulls her away as there is a snake on the box.

© Copyright tellybest.com, 2022, 2023. All Rights Reserved. Unauthorized use and/or duplication of any material from tellybest.com without written permission is strictly prohibited.
Cached Saved on: Wednesday 25th of January 2023 09:00:01 AMCached Disp on: Monday 6th of February 2023 04:56:37 AM