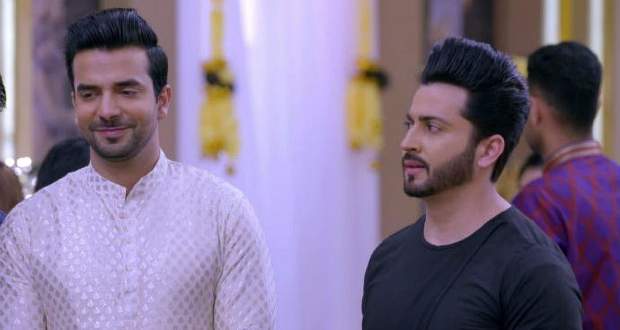 Meanwhile, Prithvi notices something is wrong with Sherlyn and goes to her.

Sherlyn says to Prithvi that she noticed Mahesh’s movements.

Prithvi freaks out listening to this and teams up with Sherlyn and Mahira to destroy Luthra’s house.

Meanwhile, Srishti notices them, and Prithvi also notices her and leaves from there

But Srishti suspects that the three are planning something against Luthra’s.

Sarla notices Prithvi and glares at him. Kareena sees Sarla and asks her to not glare at Prithvi because he is her son-in-law now.

Later, Prithvi flirts with Preeta while Preeta warns Prithvi to stay within his limits.

The next morning Rishabh calls Karan and informs him that he is on the way to Luthra’s house.

Kritika goes to select outfits for Prithvi. after a while, Prithvi joins her.

Kritika hugs Prithvi and asks him to finalize the outfits while Sherlyn gets irritated seeing them together.

Later, Rishabh comes to Karan’s room and wakes him up.

On the other hand, Prithvi runs into Janki aunty and taunts her with his words.

© Copyright tellybest.com, 2020, 2021. All Rights Reserved. Unauthorized use and/or duplication of any material from tellybest.com without written permission is strictly prohibited.
Cached Saved on: Wednesday 21st of April 2021 12:20:32 AM