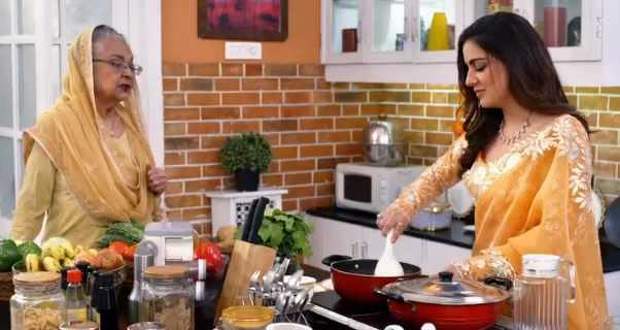 Rakhi reminds Mahesh of his birthday and they share a pleasant moment together.

Later, Prithvi accuses Preeta of being responsible for his fall.

He further poisons Kritika’s mind by implying Preeta’s effort to bring Mahesh out of the basement as nothing but a scheme to make a mockery of Mahesh.

Prithvi acts agitated and warns Kritika that if Preeta continues to play her games then he will have to take action.

Kritika asks Prithvi to do whatever he thinks is right in retaliation to Preeta and assures him of her support.

In the hall, Karan attempts to give Preeta a flower but gets confused in front of her.

However, Preeta understands Karan’s feelings and teases him for not being able to say thank you effortlessly.

On a serious note, Karan cautions Preeta of inviting other people to a party and asks to postpone it.

Despite Karan's reservations, Preeta convinces him not to cancel the party.

At the lawyer's office, Shrishti tries to convince the lawyer to invite Judge to the party to which he agrees after some hesitation.

Nagre recognises Shrishti while coming to the lawyer’s office and enquires after the purpose of her visit.

After a while, Shrishti calls Preeta assuring Judge's presence at the Party.

Preeta hopes for the Judge to see Mahesh in a fine state and declare him healthy.

Later, Biji appreciates Preeta’s changing for the better and prays for Mahesh’s betterment.

Afterward, Prithvi walks into the party dressed as Gabbar. On seeing Preeta, he wonders about Preeta’s extravagant spending money on the Luthras.