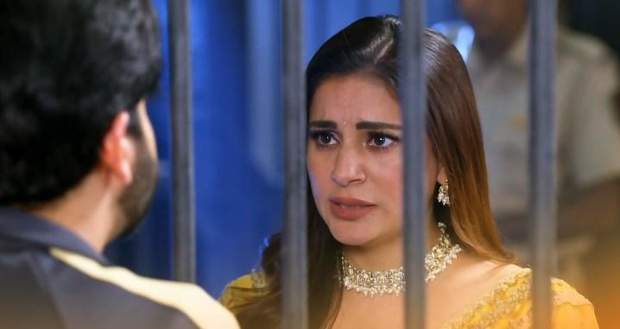 Inside the police station, Karan is throwing things to take out his frustration and later cries.

Preeta vows to bring him out of the jail despite their misunderstanding.

The next morning, everyone is ready to do breakfast but changes their plan after seeing Preeta.

Preeta gets a call from the investigator about Sandesh's location and goes to meet him.

Prithvi is in the disguise and hides under a hoody to meet Sandesh.

The investigator sees Prithvi with Sandesh and wonders about him.

Meanwhile, Sandesh tells him about someone collecting evidence against him.

Prithvi panics and asks him to enter his bank details into the phone and take the money and disappear.

Just then Prithvi spots Preeta and vanishes from there before she can see him.

Preeta confronts Sandesh but he lies to her and goes away to avoid being questioned.

Preeta wants to find out about the man in the hoody and follows him.

Prithvi keeps on escaping her in the hotel.

Preeta plants a trap to catch the man and comes very close to catching him.

However, Prithvi escapes in an auto while Preeta follows him.

On the way, Prithvi picks Sandesh on the way and instructs him to leave the country and not get caught and implicate him.

At some point, Prithvi gets out of the auto thinking that he has escaped but Preeta spots him and catches him from behind.

Preeta is shocked to see Prithvi as the culprit.