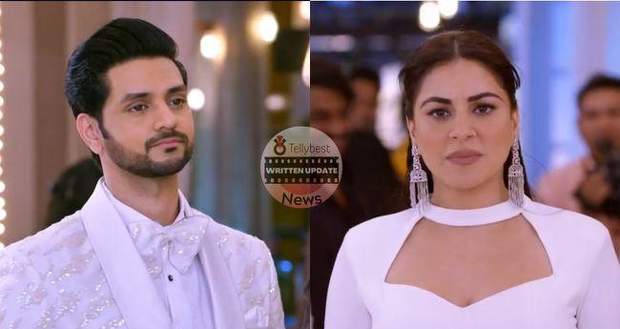 Today's Kundali Bhagya 3rd October 2022 episode starts with Prithvi telling Arjun that he might be a bad person but he will never hamper a girl’s dignity as he only loves Preeta.

Hearing Prithvi's confession, Arjun gets furious and punches his face.

Furious Prithvi asks Arjun why he gets angry when he talks about Preeta and who she is to him.

Meanwhile, Prithvi threatens him to apologise and give him money but Arjun tells him to do whatever he wants to do.

When Prithvi is walking out of the room, Anjali slams a stick on his head and he loses consciousness.

Afterwards, Arjun puts his unconscious body in the car and scolds Anjali for being aggressive and irrational.

On the other hand, the goons are waiting for Prithvi and are suspicious of Arjun being a dangerous man.

At the same time, Sameer hears the conversation from outside the room and confronts them.

Meanwhile, Arjun and Anjali enter the hall and she glares at Rishabh and calls him a backstabber.

However, Arjun assures her that Rishabh’s smile will go away after tonight.

At the same time, Rishab informs him and Anjali about winning the Heritage Palace deal.

Arjun recalls how he came back to India because he lost the bid of Heritage Palace.

He also recalls his accident and how he regained his memories of Preeta and Rishabh’s betrayal.

On the other hand, the goons lie to Sameer but he does not believe them and asks them what they are doing in the room and kicks them out of the room.

In the car, Sherlyn is waiting for Prithvi and calls Raju and asks him about Prithvi's whereabouts.

Meanwhile, Raju informs him that Prithvi told them to give him one more chance to Arjun and they are not able to find him anywhere.

However, Sherlyn sighs as she knows Prithvi has messed up the plan again and he is trapped by Arjun.

On the other hand, Rakhi makes a plate of food, especially for Arjun and he gets emotional while she puts morsels of food in her mouth.

Both Rakhi and Arjun recall their precious moments spent together and he takes the plate from her hand and offers a spoonful of food.

© Copyright tellybest.com, 2022, 2023. All Rights Reserved. Unauthorized use and/or duplication of any material from tellybest.com without written permission is strictly prohibited.
Cached Saved on: Monday 21st of November 2022 07:44:53 AMCached Disp on: Tuesday 6th of December 2022 12:22:45 PM