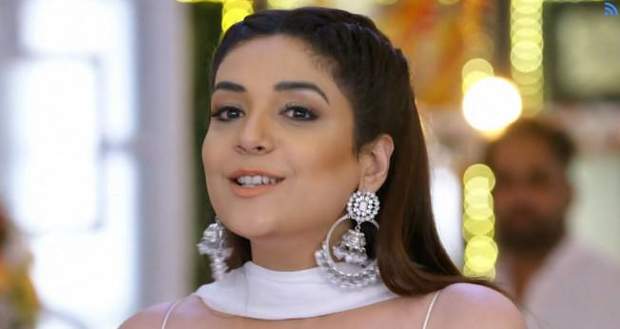 Today's Kundali Bhagya 4th April 2022 episode starts with Nagre talking to himself while going to his car.

After a while, Nagre decides to disguise himself and go inside once again.

Meanwhile, Karan has changed his clothes and comes face to face with Preeta. Both Preeta and Karan communicate with each other through their eyes.

Observing Preeta’s distress, Karan questions her and offers to help her.

Surprised at Karan’s concern, Preeta tries to express herself but he does not understand her answer.

Asking her to join everyone in playing Holi, Karan pretends to go and attacks Preeta with an intention of colouring her but stops and only applies a little 'teeka'.

Preeta feels disappointed when Karan opts to not play Holi with her, she also applies 'teeka' on him and leaves him.

Karan realises his mistake and runs after Preeta to colour her while Preeta runs away from him to save herself.

Holi has brightened every heart and love is in the air.

On the other hand, Sameer and Shrishti are coming closer on the pretext of playing Holi with each other.

Meanwhile, Karan once again spots Preeta, gazing into her eyes he moves towards her slowly and once again ignores her and colours Natasha instead. Preeta gets irritated at Karan’s obvious ignorant behaviour.

She is in thoughts of taking revenge on Karan and fails to recognise Nagre in disguise.

At the same time, Sherlyn receives a package from someone secretly.

Once again, Karan approaches Preeta but this time Preeta is not in a mood and talks back to him.

Karan is in a playful mood and teases Preeta while coming closer to her. Just as Preeta begins to think that he will colour her, he diverts his attention elsewhere, annoying Preeta in the process.

Shrishti comes to Preeta and asks her why hasn't she told Karan that she wants to play Holi with him.

Preeta gets angry and follows Karan to question him while Shrishti follows her to keep eye on her.