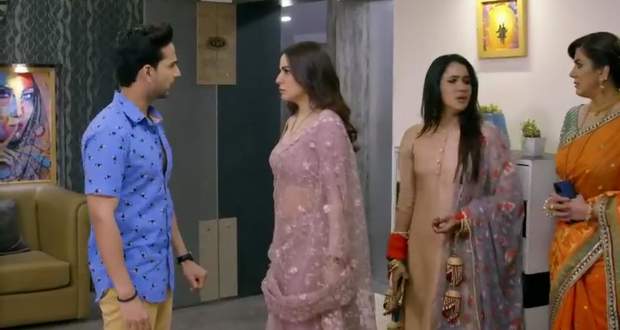 Today's Kundali Bhagya 4 February 2021 episode starts with Akshay telling Megha that he will break marriage with Kritika and be with her all his life.

Megha asks for a gift to which Akshay gives her a dress and tells her to change as he wants to relax.
Megha goes for changing dress in the washroom while a waiter comes to their room for delivering alcohol.
Sameer is keeping eye on Akshay while Hotel Manager sees him doing so.
Sameer leaves the hotel premises fearing Akshay would come to know about his presence as Hotel Manager is insisting him to leave.
Rakhi, Kareena, Sherlyn, Kritika, and Preeta are going to Crowns hotel while Sherlyn suggests them to call Akshay.
Kareena calls Akshay and asks where is he as they need to deliver Shagun to him.
Akshay tells her that he will be available after one hour as he has gone outside with his family to which Preeta says he is telling so because he is at the hotel.
Preeta asked the receptionist about who checked in at room number 101 to which she says, Akshay with a girl.
Kritika rushes to the room finding Akshay there, everyone gets shocked.
Akshay tells very innocently that nobody is there in the room else than him.
Everyone hears a voice coming out of the washroom to which Preeta asks Akshay who is there in the washroom.
Rakhi tells Akshay that she breaks marriage here and now to which Kareena says that Akshay is not proved yet guilty.
Preeta tries to open the washroom but in vain. Preeta asks the hotel staff to open the washroom.
Preeta goes to the washroom and sees that no one is there in the washroom.
Akshay's father and mother come to the room, feels bad for Akshay, and says that Preeta always tries to humiliate their son.
Kareena apologizes to Akshay's father and mother and assures them that this will not happen again.