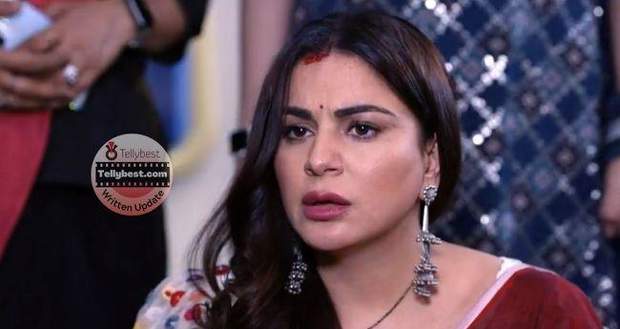 Today's Kundali Bhagya 4th January 2023 episode starts with Rakhi beginning to sing to ward off the snake while Shrishti tells her that snake will not leave by singing but by hearing the whistle.

However, neither of their tricks works and then Arjun uses the wooden slab to remove the snake and takes away the boxes from there to their cabin.

Afterwards, everyone helps Preeta to make the spray.

The moment the spray was made, a snake comes to the apartment from somewhere and would have bitten Rakhi if Preeta hadn’t sprayed it.

Arjun suggests spraying in the economy cabin and cargo so that the snakes do not come from there to this cabin.

After a while, the turbulence begins in the plane scaring Preeta while the newlywed wife tells Arjun and Preeta that her husband knows how to fly the plane.

Arjun tells him to come to the pilot’s cabin and find out what the trouble is.

After a while, they are all shocked to see both pilot and terrorist dead in the cabin and the plane losing altitude fast.

Arjun tells Vini to take control of the plane and save the passenger.

In the meantime, Vini tells Preeta to take the co-pilot’s seat and assist him in landing the plane.

Preeta tells him that she has no knowledge about the plane and will not be able to help him.

However, Arjun tells Preeta that he has confidence in her and that she will handle it well.

In the beginning, Vini panics and does not know what to do but later lands the plane safely on the runway.

Snigdha’s Dadi as well as Kritika and Dadi feel relieved to hear the news of the plane’s safe landing.

Later, Sameer comes running down from his room and rushes outside trying to get to the airport.

After a while, Sameer hugs Shrishti seeing her while Arjun begins to feel dizzy and Preeta supports him stopping his fall.

At the hospital, Preeta admits Arjun while Anjali tells her to go and be with her family.

However, Preeta refuses to leave until Arjun gets well as he has saved Kavya.

Preeta also tells Anjali that there is some relationship between them that is keeping them together and she will not leave Arjun alone.

Anjali feels jealous at Preeta’s imposing herself upon Arjun and tells Snigdha’s Dadi that she does not like it.

After a while, Shrishti comes to Preeta and tells her that there is definitely a bond between him and Preeta.