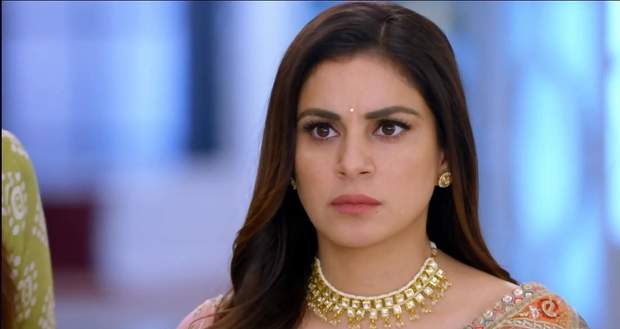 Today's Kundali Bhagya 4th May 2022 episode starts with Preeta finding out that the culprit is Prithvi and everything seems to fall into place.

Preeta is desperate to save Karan and is reminded by Prithvi that Karan doesn't trust her anymore and wants nothing to do with her.

On the other side, Karan talks with his lawyer and tells him to do whatever he can without taking Preeta's help.

Here, Sameer begins to walk away from Srishti and she decides to tell him everything from the start.

Srishti tells Sameer about all the struggles Preeta has gone through and all the things she has done for the Luthra family.

Inquiring why Preeta never revealed anything to the family regarding her intentions, Srishti asks whether they would've trusted her.

Still frustrated with Sameer's intervention in their plan, Srishti tells him everything about Maddy and all the information he has found.

Preeta spots Srishti and walks towards her, Sameer tells Preeta that he believes in her.

Preeta reveals to Shrishti and Sameer that Prithvi is the mastermind of everything.

On the other hand, Prithvi gives Sherlyn the ultimatum of two days to kick Natasha out.

Overhearing Prithvi and Sherlyn, Natasha decides to snitch to Preeta in an attempt to gain all the money she wanted.

Later, Natasha rants Prithvi out to Preeta but is a bit late and stupidly drops the axe on her legs as Preeta knows everything already.

Sameer loses control and hits Prithvi till he turns blue and black and reveals to the complete family that Prithvi framed Karan.

Turning the tables, Prithvi accuses Preeta of being the real culprit.

Preeta slaps Prithvi hard and warns him to never utter a word regarding Mahesh.

Kareena jumps in and tells Preeta that she has been the cause of all the trouble in their life.

Avoiding the blame game, Preeta storms out to go to the police station and tells Shristi to keep a watch on all the members.