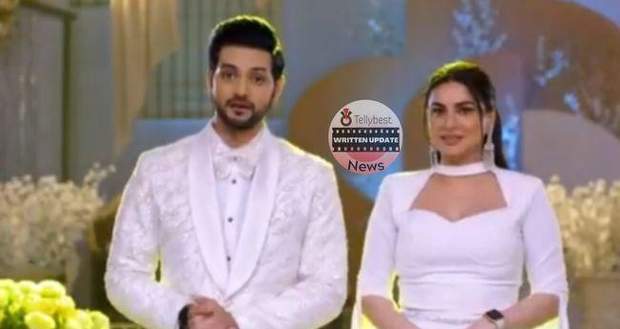 Today's Kundali Bhagya 4th October 2022 episode starts with Rakhi confiding in Arjun that she finds her Karan somewhere in him which is why she gets so emotional.

He also tells her that she is like a mother to him.

They both get emotional when Rakhi tells Arjun that she is glad Rishabh has someone to rely on like a brother and that he is not alone now that Arjun is there.

Arjun recalls how he intended to show the clips of Rishabh's cases at the party and leaves from there in a hurry.

Arjun cries standing near the balcony while Anjali comes there and tries to console him.

Arjun tells Anjali that his whole family will hate him if he releases the video about Rishabh.

Anjali tells him that she won't stop him if he doesn't go through with the plan today but she will tell him that the person whom he calls his brother is his enemy and he should not love his enemy.

Arjun gets influenced by Anjali and tells him she is correct and that she is the best as she always put him back on track.

Anjali goes to the party and seeing Rishabh and Preeta, thinks that they are fake and two-faced and are putting up a front for the whole world.

Further, Shrishti does a dance performance with Sameer who changes the song to a romantic one and does the waltz with her.

They drag Rishabh and Preeta to dance too and Arjun goes with Anjali in anger.

Not able to see them dancing together, Arjun separates the two while Anjali comes to the rescue and lies that Preeta's dress was getting stuck in her feet.

They start dancing once again and the partners change as Preeta glides into Arjun's hands flawlessly.

Later, Shristi says that it is time to show them a projection of the collaboration happening between Luthra and Suryavanshi.

Anjali and Arjun rush to the projector room to change the pen drive while Arjun seems hesitant.

However, Arjun sees Preeta getting hurt and rushes to help her and do her aid while Anjali looks on.

Arjun tells Preeta to be strong and not wince like a child while she tells him that he cannot say that knowing that she's a doctor.

They both argue childishly while Arjun says something from the past that only she and Karan would know.

Elsewhere, Prithvi is stuck in the car and tries to move out but fails.

Sherlyn sees the car moving and runs away from there thinking that it's a ghost.

Preeta stops Arjun and asks him how he knows that she got sick after the blast in 2019.

© Copyright tellybest.com, 2022, 2023. All Rights Reserved. Unauthorized use and/or duplication of any material from tellybest.com without written permission is strictly prohibited.
Cached Saved on: Monday 21st of November 2022 06:33:55 AMCached Disp on: Wednesday 7th of December 2022 12:56:24 PM