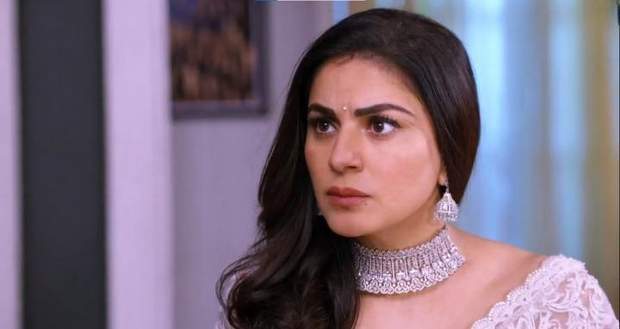 Today's Kundali Bhagya 5th August 2022 episode starts with some guests asking about Preeta when Rishabh sees the platoon of goons dressed as waiters standing at the door.

He goes to question them for using the main door instead of the back door and guides them to the guest room while instructing them to use the backdoor from now on.

After a while, Rishabh asks Sameer about Preeta while Shrishti offers to find her for him.

Meanwhile, Preeta and Arjun fight with each other while Arjun makes suggestive comments that anger Preeta.

Just then Shrishti comes to the kitchen while Arjun uses her to prove his innocence and that he was not flirting with her but only giving her a genuine compliment.

On being asked, Arjun tells Shrishti that Preeta is accusing him of flirting with him when all he did was righten her Bindi.

He tells Preeta to learn manners from Shrishti which instigates Preeta.

Preeta berates Shrishti for allowing a stranger to touch her hair while Shrishti tells her that she always takes Karan wrong while there is absolutely nothing wrong with him.

Meanwhile, Kritika goes to her room to relieve her ears from earrings and freshen up when Prithivi enters her room dressed to party.

After a while, he changes his look into a sardarji to join the party.

Later, Rishabh goes to Arjun with a drink and hugs him while the goons look at them in surprise.

Arjun tricks Rishabh into getting scolded by Rakhi while Rishabh keeps on explaining his side.

After a while, Rishabh complains to Sameer about Rakhi scolding him because of Arjun.

Rishabh sees Mahesh and his family laughing with Arjun and becomes happy.

Later, Rishabh tells Preeta that he has also organised something for the family and asks everyone to join them in dancing and frolicking.

During the dance, Preeta comes face to face with Arjun after changing partners and dancing with him reminds her of their past dance and she leaves the dance in between and leaves the room crying while Shrishti and Arjun look at her worriedly.

On the other hand, Raja and the goons are confused to see Arjun and Rishabh together despite giving a contract for hurting him.

Raja wonders whether they are brothers or not while Vishnu tells Raja that Arjun has called Rishabh his brother.

In the meantime, Preeta is going away from the party wondering what makes her react to Arjun like that.

© Copyright tellybest.com, 2022, 2023. All Rights Reserved. Unauthorized use and/or duplication of any material from tellybest.com without written permission is strictly prohibited.
Cached Saved on: Monday 21st of November 2022 08:29:39 AMCached Disp on: Monday 5th of December 2022 02:37:56 PM