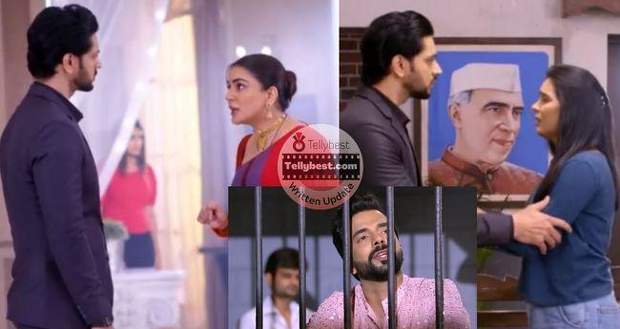 Today's Kundali Bhagya 5th December 2022 episode starts with Preeta warning Mr Malkani that he will be losing this case despite his reputation.

Mr Malkani feels threatened and tells his assistant to tell all his acquainted lawyers to not take the case and that no one else will take the case as well.

Meanwhile, Rakhi is unhappy to see Kritika and Dadi come out from Arjun’s car.

She tells him to not ever talk to her as she feels anger and hatred towards Arjun when she hears his voice.

She also asks Arjun to get out of their lives as she does not want to lose Rishabh too.

Arjun tries to comfort her but she slaps him saying to get out of their life.

Arjun cries in pain for being treated badly by her soft-hearted mother.

Meanwhile, Preeta and Shrishti meet another lawyer who tells them that no one will believe Rishabh to be innocent after the news they have seen.

He also tells them that neither he nor other lawyers will take Rishabh’s case.

However, Preeta tells him that there are many lawyers who will take her case and will win it too.

Later, Preeta and Shrishti both approach many lawyers but so far they only face failure.

On the other hand, Anjali tells Priyanka how she made those marks upon her person.

Meanwhile, Arjun returns to his house feeling dejected and recalling everything that has happened to him and Rakhi’s hatred for him.

In the meantime, Anjali tells Priyanka that her first priority is to get Arjun justice for what Rishabh has done to him and her second priority is their business which will become number one once she removes Rishabh from the competition.

Just then Arjun comes to Anjali’s room and asks her to take back her case against Rishabh.

Meanwhile, Preeta also comes to Arjun’s house and tells the servant to inform Arjun about her.

On being asked, Arjun tells Anjali that he does not know who is innocent and who is not but he cannot see his mother in pain and he wants to make her happy again.

After hearing Arjun say that he believes Rishabh to be innocent, she reminds him how this same Rishabh has taken away his life from him including his wife and daughter.

Arjun tells her that he remembers everything and will definitely punish Rishabh and Preeta for what they have done but for now, he wants to return his mother's happiness back to her and for that, she will have to take her complaint back.

As Arjun pulls Anjali towards the door, the servant comes to inform him about Preeta.

Arjun tells Anjali that he will tell Preeta that Anjali had some misunderstanding and she is taking her case back.

After Arjun leaves, Anjali tells Priyanka that she has expected this from Arjun but she cannot take her case back as she will be proved wrong otherwise.

Later, Preeta tells Arjun she knows that he is calling all the lawyers behind her back not to take Rishabh's case.

However, Anjali tells Priyanka that it was not Arjun but her who has done this to Preeta.

Meanwhile, Preeta tells Arjun that this was his last win and that from tomorrow she will win and take Rishabh out of jail because his family loves him a lot.

After being instigated by Arjun, Preeta tells him that he loves Rishabh more than anyone in the world.