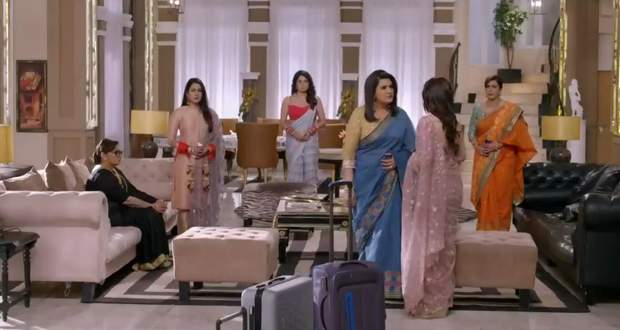 Today's Kundali Bhagya 5 February 2021 episode starts with the manager threatening Sameer to call the police if he doesn't tell what was he doing in front of his client's room.

Sameer tries to calm him while Srishti informs the manager that how they belong to a news channel and will expose their hotel. The manager offers then some money and they leave the hotel.
Preeta stops Kareena to apologize and says we can't marry Kritika with Akshay as he is guilty while Kareena tells Preeta not to speak in elder's matter.
Preeta inquires Akshay having drinks to which his father explains Akshay called few friends who can't come to the wedding.
However, Preeta is sure that Akshay is lying to which Akshay's mother says they can't bear insult anymore and not carry forward with the marriage today. Rakhi orders Preeta to keep quiet.
Kareena requests them that it won't happen again and takes Preeta out of the room with her hands.
Akshay's mother slaps him for not being aware of Preeta's plans while his father asks him why is he lying as they saw Akshay having lunch with Ruchika to which he says she blackmailed him.
Kareena is about to shout at Preeta in the parking area while Rakhi pleads with Kareena to solve the matter at home.
Akshay offers Preeta to leave her whenever she says. Preeta asks why is he ruining Kritika's life when he doesn't love him.
Akshay is overconfident about himself and says he will take revenge for his mother's slap and Preeta's every deed from Kritika today's night only.
Akshay gets mad and explains to Preeta that he saw Sameer hiding behind flowers and when Kareena called him he became sure that she is coming with the entire Luthra family and he sent Megha in a trolley.
As Preeta is waiting, Sameer and Srishti comes and inquires about how Akshay managed to send Megha away. Preeta explains them the detail.
Preeta leaves for the house in the auto where everyone is waiting for her. Kareena orders Preeta to go to her mother's house till Kritika's marriage.