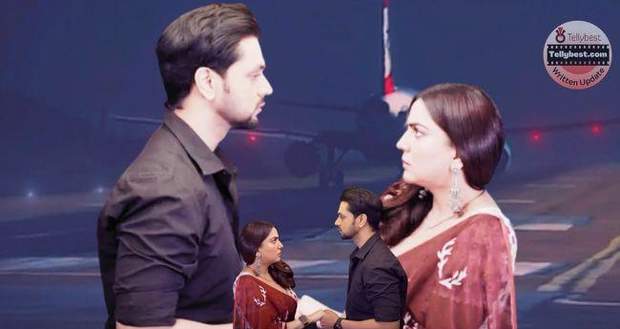 Today's Kundali Bhagya 5th January 2023 episode starts with Shrishti telling Preeta that she has this feeling that there is some relationship between her and Arjun.

Preeta reminds her saying that Arjun is the reason why they were all in this danger and how he had tried to hurt Kavya.

Shrishti interrupts her and tells her that Arjun has never harmed Kavya ever despite his enmity with Rishabh and her.

Preeta tries to walk out but Shrishti stops her saying the truth will remain true no matter how she sees it.

Shrishti tells Preeta that she will always be grateful to Arjun for protecting her sister and Kavya.

Just then Sameer and Kavya come there and tell Preeta the doctor is calling her.

Meanwhile, the doctor tells Anjali and Snigdha’s Dadi that he cannot do so.

Just then Preeta comes there asking about Arjun, which triggers Anjali and she tells her that Arjun wants to talk to her instead of her.

Preeta immediately goes inside where Arjun looks at her and asks her why is she crying when she wants him dead.

Preeta tells him if he will talk this way then she will go from there.

Meanwhile, Arjun stops her and apologises to her for hurting them and will also talk to Rishabh apologising to his family.

Just then Arjun goes back to sleep while Preeta also feels dizzy and would have fallen if the doctor hasn’t saved her.

Anjali gets worried to see Preeta in a wheelchair and asks the doctor if she can meet Arjun.

However, the doctor refuses to tell Anjali that Arjun is not well and is unconscious.

After a while, the nurse tells Rakhi and Kareena about Preeta falling unconscious all of a sudden and being transferred to another room.

In the meantime, Sameer and Shrishti come back after feeding Kavya and are shocked to hear about Preeta.

As Rakhi and Kareena walk towards Preeta’s room Anjali ignores them and walks away.

Just then, Rakhi hears Arjun’s calling her and goes to her room where Arjun tells her to not go away from him.

The doctor tells Rakhi that Arjun is under the influence of medicine and saying nonsense.

Meanwhile, Kareena looks at Preeta being treated and looks for Rakhi.

In the meantime, Rakhi is thinking about Arjun and prays to God to save Arjun and let him meet his mother.

Afterwards, Rakhi sees a flower fall down and feels blessed.

Meanwhile, Anjali recalls Arjun confessing his love for Preeta and thinks that Luthras do not deserve his love.

Meanwhile, Kareena tells Preeta’s doctor that she will get Rakhi who wants to meet Preeta.

Just then Anjali comes to Preeta's room and asks Preeta what she wants from Arjun.

Anjali tells her that Arjun is in this condition because of her and once before she tried to kill Arjun and today also he just got saved by hair’s breadth.

Outside the room, seeing Rakhi Anjali thinks of sending her to Arjun who will feel better and stops her from going to Preeta’s room.

However, Rakhi moves towards Preeta’s room first which makes Anjali wonder why everyone loves Preeta so much.