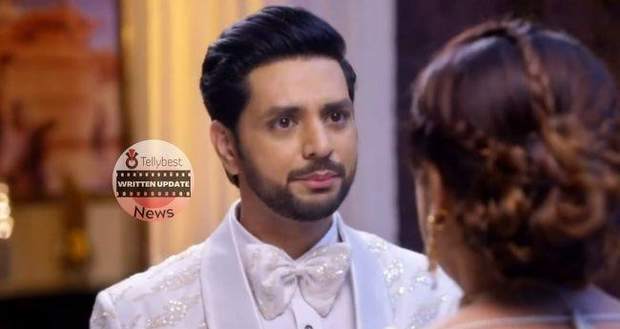 Today's Kundali Bhagya 5th October 2022 episode starts with Preeta asking how he knows the talks that only she and Karan knew.

Arjun says that he has a business partnership with Rishabh and in business, everyone finds out their partner's history.

However, Preeta scoffs at Arjun that nobody digs into personal things like when Preeta's got a fever and what she likes and dislikes.

Preeta holds Arjun by his shoulders and asks him to tell everything about him.

Arjun covers up by saying that he knows everything about the terrorist attack because he extracted all the details before doing Karan's cricket bidding and Karan's coach knew everything about Karan who in turn told him.

Later, Sherlyn collides with Rishabh and lands in his arms straight while the goons Raja and his friend recognize Sherlyn.

Rishabh asks Sherlyn to leave as he has nothing to do with her and shows her the outside door.

In the room, Arjun asks Preeta whether she thinks he is her Karan when Kritika enters the room and asks her the reason behind her worried face.

Preeta explains to Kritika that Arjun is asking her whether he is their Karan or if he has any other quality of Karan while Arjun tells how Rakhi claims him as her Karan.

Arjun talks in a mocking tone that he has no intention to get closer to Preeta while Kritika asks Preeta to not get hyper at Arjun for no reason.

Meanwhile, Sherlyn reaches near the car and deciphers that Prithvi is inside the car when he follows as she asks him several questions to shake the car.

She gets Prithvi out who tells her that Arjun locked him inside the car.

Prithvi asks Sherlyn to be safe as it will be helpful for them and decides to teach Arjun a lesson with his attack.

In Preeta's room, Kritika gets emotional seeing Arjun as she remembers Karan and leaves.

As Preeta goes after Kritika, Arjun steps again on her dress and they start bantering like children while Rakhi sees them fighting.

Arjun says to Rakhi how he did not step on the dress rather it came under his feet while Preeta says that Arjun never says sorry.

Rakhi amusingly watches them and takes them to the hall.

Later, Rishabh asks Arjun to not say anything bad about Preeta while Arjun asks him not to come between him and Preeta.

Rishabh says that nobody can come between him and Preeta and Arjun says he came in between them.

After entwining words, Rishabh asks Arjun why he is that weird while Arjun says he does not have an answer to that himself.

Arjun says if love happens it stays even if the other person is your enemy which leaves Rishabh confused.

Rishabh says that he can see love, doubt and a sense of revenge in Arjun.

Later, Anjali gets upset with Arjun and says he Arjun forgets his revenge while Rishabh interrupts them.

© Copyright tellybest.com, 2022, 2023. All Rights Reserved. Unauthorized use and/or duplication of any material from tellybest.com without written permission is strictly prohibited.
Cached Saved on: Monday 21st of November 2022 06:54:01 AMCached Disp on: Tuesday 6th of December 2022 01:58:19 PM