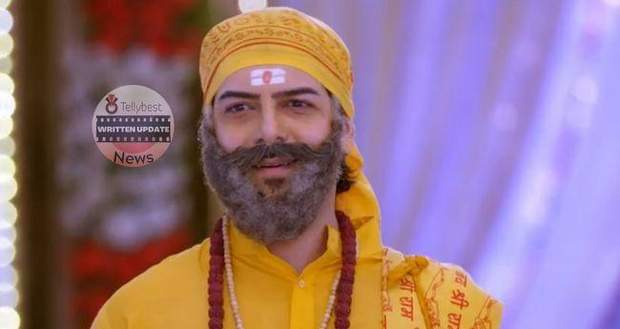 Observing Rakhi and Arjun together, Sherlyn follows them.

Feeling annoyed Prithvi takes out his beard to scratch his itching face.

Just then, Kritika sees Prithvi without a beard and recognises him and runs to catch him.

Meanwhile, Rakhi makes Arjun sit in her room and tells him that she wants to savour these moments with him as he is a replica of Karan as if Karan's soul has taken a new body.

On being asked, Rakhi tells Arjun that she does not miss Karan as he lives in him. Rakhi also tells him that Karan loves him a lot and always needed attention from her but now there is no one to annoy her and she feels his absence dearly.

Rakhi also tells Arjun that she loves Rishabh but Karan was her life.

He thanks Rakhi for loving Karan so much because it feels like she is showering love on him.

Meanwhile, Rakhi tells Arjun with love that she wants to capture this moment with him so that she can relive it whenever she likes.

As Rakhi search for her phone, Arjun remembers Rakhi’s habit of putting her phone under the pillow and tells her without thinking that he should not know that.

Karan makes an excuse about his mother doing the same.

After a while, Arjun is watching Preeta talk on the phone and smiles.

However, Sameer questions Arjun alone while Preeta also roasts him for smiling and tells him that when rude people like him smile it becomes a wonder of the world.

Preeta also tells him that she knew very well that he is watching her talk on the phone and whatever happens in this house she is aware of it.

Just then Rishabh slips while coming towards Preeta and would have fallen if Preeta hadn’t caught him.

Later, Arjun feels offended at being told off while he tries to butt in between Rishabh and Preeta's discussion about the PTA meeting.

After a while, Arjun and the Luthras men are gathered to sign the contract.

Arjun praises Rishabh for being fast in preparing the papers.

After a while, Arjun once again teases their memory of Karan by playing with the ball and asking for a golden pen instead of a normal pen.

Once Arjun leaves them, Sameer tells Rishabh and Mahesh that Arjun's style and talking and asking for a Golden pen is so similar to Karan that it feels like he is talking to Karan.

© Copyright tellybest.com, 2020, 2021. All Rights Reserved. Unauthorized use and/or duplication of any material from tellybest.com without written permission is strictly prohibited.
Cached Saved on: Sunday 2nd of October 2022 12:00:32 AM