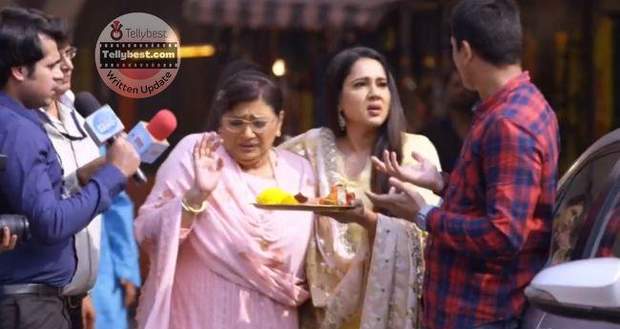 Today's Kundali Bhagya 6th December 2022 episode starts with Preeta telling Arjun that she loves Rishabh more than anyone in the world.

However, Preeta tells him that he is delusional to think he is powerful but in reality, he is nothing more than a disgusting person.

She tells him that now that she has seen his real side she knows what to do about him.

Arjun does not meet Anjali’s eyes after Preeta’s departure and goes to his room.

Later, Snigdha’s Dadi asks Anjali to go and get rest while Priyanka tells her that she will stay here for a few days to look after Anjali.

At home, Mahesh understands from Preeta’s expression that she could not convince Malkani while Preeta assures him that they will hire someone else.

In the meantime, Sameer also comes there and tells Preeta about a lawyer who is very good but hasn’t fought a case in three years.

Preeta agrees to talk to her and assures Mahesh that she will get Rishabh out by hook and by crook.

Later, Shrishti and Sameer talk about Arjun being weird for creating problems for them and then helping Dadi and Kritika.

Meanwhile, Arjun imagines Preeta and Rishabh in his room dancing romantically and freezes in anger and jealousy.

He recalls Preeta's various statements where she has emphasised her relationship with Rishabh and throws a vase to get rid of the noise inside him.

On the other hand, Preeta is thinking about Arjun’s weird question and wants to know why is Arjun after their life.

Meanwhile, Arjun tells Preeta in his imagination that Arjun is her punishment for betraying Karan in the worst possible way so that no one can ever dare to hurt another man by playing with his feelings.

The next day, Preeta is standing outside the courthouse when Anjali comes to mock her for not getting a lawyer.

However, Preeta smiles at her and introduces her to her lawyer, Damini, who has just arrived.

Anjali tries to emotionally manipulate the lawyer but she tells him that she knows many girls who misuse their power to frame innocent men.

Damini tells Preeta that she will have to read the case once again as Rishabh’s case is not that strong.

Preeta feels dizzy at the news and would have fallen if Arjun hasn’t saved her in time.

Seeing Arjun, Preeta rejects his help and tells him that he will prove his selfishness and cowardness in court.

She shames him for using a girl to defeat Rishabh and tells him that there are many people in Rishabh’s life who know him very well and are standing with him in support.

Arjun cannot tolerate Preeta’s praises for Rishabh and tells her that Rishabh has tried to kill the person who loved him the most.

Before he can reveal anything more, Anjali stops him and tells him to be careful in future.

Meanwhile, Rishabh tells his family to not worry about whatever the court will decide because they will find another way to get out of this problem.

Later, Rakhi comes out and requests Arjun to leave Rishabh alone and take his case back as she wants to see them both as brothers and not enemies.

After a while, court proceedings begin and Malkani calls Anjali onto the witness stand.

© Copyright tellybest.com, 2022, 2023. All Rights Reserved. Unauthorized use and/or duplication of any material from tellybest.com without written permission is strictly prohibited.
Cached Saved on: Thursday 26th of January 2023 02:00:24 AMCached Disp on: Monday 6th of February 2023 02:24:39 AM