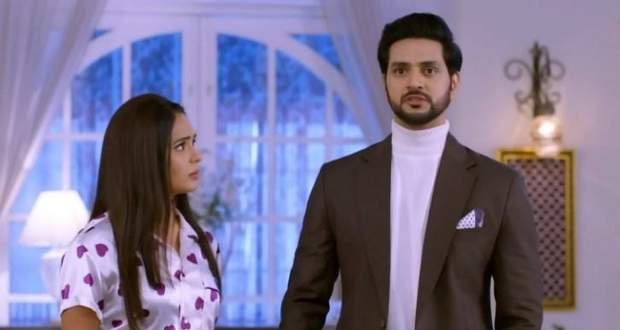 Today's Kundali Bhagya 6th July 2022 episode starts with Shrishti comforting Preeta and telling her to relax and sleep and then she will feel normal.

In the meantime, Preeta is thinking of Karan and missing him.

Karan is also reminiscing the past and tells Preeta that she is money minded and that is why she has chosen Rishabh over him.

Karan is ready to defeat his enemies and that is why he came back from the dead.

The next morning, Sameer is talking to some girl on the phone while Shrishti overhears his conversation.

On the other hand, Karan is getting angry at the decorators for messing up the colour combination while Anjali tells him that she will take care of it.

In the meantime, Preeta is selecting a dress for the party and thinking of Karan when Rishabh comes in asking Preeta about getting ready.

Preeta tries to excuse herself from the party but later changes her mind while Rishabh observes her being tense and wonders what could be the reason.

Meanwhile, Karan is selecting a dress for a party when he recalls what Preeta likes about him and rejects her choice with hatred.

He decides to dress as per his choice today which is jazzy.

Just then Anjali comes in and is amazed to see his jacket on the floor.

Karan tells her that it is Preeta’s choice for him and now he will only wear what he likes as he is the style icon the Karan Luthra.

Elsewhere, Sherlyn asks Prithvi about the auction while Prithvi tells her about Arjun who walks and talks like Karan and has bought the bat for 3 crore rupees.

At the Luthra house, Shrishti and Kritika get into a verbal bantering while Dadi and Kareena also join in.

Just then Rakhi and Mahesh come down and later Rishabh and Preeta also come to join everyone.

Preeta’s restlessness is increasing with time.

Later, Anjali tells the reporter about Arjun Suryavanshi and creates a mystery around him.

After a while, Anjali’s cousin asks her about not feeling jealous of Nidhi that she has found Arjun and not her.

Anjali quietens for a while but tells her that she is happy for Nidhi.

© Copyright tellybest.com, 2022, 2023. All Rights Reserved. Unauthorized use and/or duplication of any material from tellybest.com without written permission is strictly prohibited.
Cached Saved on: Wednesday 25th of January 2023 12:50:38 PMCached Disp on: Sunday 5th of February 2023 12:50:27 PM