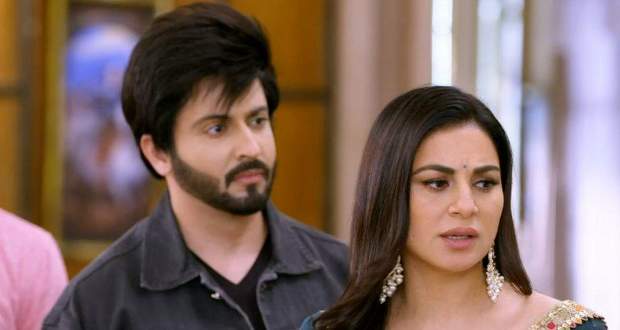 Today's Kundali Bhagya 6th June 2022 episode starts with Rishab arriving at Roxy’s house to save Preeta and find her tied. He climbs the step to untie her while Roxy's friend takes pictures of them together.

Afterwards to make the kidnapping look real Roxy and his friends attack Rishabh who fights him and runs from there.

After some time Roxy sends Rishabh and Preeta’s pictures to Natasha.

Natasha says that Karan will see the pictures and get mad with anger and throw Preeta out of the house.

After a while, Preeta tells Shrishti about Natasha’s planning and worries about Karan.

Preeta wants to tell Karan everything while Rishabh stops her and forms a plan to expose Roxy and Natasha in front of Karan.

Meanwhile, the police come to arrest Prithvi which shocks Prithvi and Sherlyn.

Prithvi refuses to go to the police station when the police tell them that Karan Luthra has filed a complaint and takes him with them.

On the other hand, Kareena, Rakhi and Karan are discussing Rishabh deserving a good life partner and plan to get him married.

Just then Rishabh comes in and asks Rakhi and others to celebrate a party at his farmhouse for which everyone agrees.

After a while, Preeta tells Rishabh that ever since she has met Karan she is only saving him from one girl to another.

Rishabh tells her that her love and dedication make her unique to Karan who loves her a lot.

He also tells her to focus on exposing Roxy and Natasha for now.

Preeta tells him that she does not understand how that will be achieved.

Rishabh tells her that they will trap Roxy and Natasha at his farmhouse mask party.

At the office, Natasha barges Karan's office while he was in a meeting and tells him that Rishabh and Preeta are having an affair.

Meanwhile, Preeta is searching Natasha’s room for some evidence against her and finds Roxy and Natasha’s wedding photograph.

On the other hand, Natasha tells Karan that although it is difficult to believe, it is the truth.

Angrily Karan tells her that he will not be responsible for the consequences if she accuses his brother or his wife one more time and shames her for such disgusting thoughts.